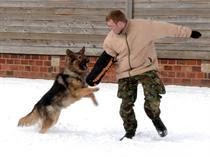 A Training and Adventure news article

Elements of 101 Military Working Dog Support Unit will be deploying to Afghanistan in April this year as part of 19 Light Brigade. The unit recently showed off their dogs on a snowy Salisbury Plain.

101 Military Working Dog Support Unit is part of the Royal Army Veterinary Corps which has responsibility in the British Army for the provision, training and care of animals.

The protection dogs are u

sed to accompany troops on patrol as well as guard bases. Unfortunately for smaller breeds who may have aspirations of becoming a protection dog, only certain types of canine are suitable and trainable, as Corporal Richard Berry from 101 Military Working Dog Support Unit explained:

"For the protection dog we use herding breeds, so German Shepherds and Belgian Malinois. We used to use Rottweilers, but we don't tend to use them so much any more, mainly because their bite's not that strong and they're lazy.

"The protection dog is generally used for guarding the base. They often also go on patrol as a force multiplier. Because of their senses they can identify enemy at 300 or 400 metres quite easily.

"Joey is a vehicle search (VS) dog. They are used on VCPs [Vehicle Check Points] and the main gate at Bastion has always got a VS dog on it. The armed explosives search dog is used pretty much everywhere in theatre at the moment."

Locating and training military dogs can prove to be a challenge in itself, as Cpl Berry explained:

"We procure our dogs mainly from rescue centres and public donations, so a lot of them are unwanted pets. One of the dog trainers will go out and evaluate the dog on the scene and, obviously, if it's a fat, lazy Labrador they're not going to take it. As long as it's got drive, it's quite energetic and is willing to please, we'll bring it in.

"It gets X-rayed around its hips and elbows because it's going to be doing a strenuous job. It then goes through all its veterinary checks and from there it gets trained. If they don't pass, they either go back to the family we got them from, or the rescue centre we got them from, or we re-home them ourselves at Melton Mowbray."

All the dogs that are used by the unit undergo thorough training in their specialised field with their handlers: