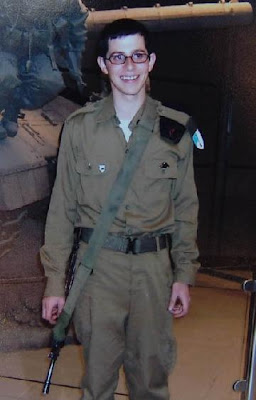 So the elections are over in Israel, and over at A Soldier's Mother is a post about how the Israeli soldiers voted. She says:

...some soldiers chose to use their vote to send a message to the government. They didn't vote for Kadima or Likud, National Union or Israel Beitenu. They voted on a blank slip saying simply "Israel wants Gilad Shalit."...

They voted for Gilad. It's time Israel's leaders wake up. It's time the world stops dreaming. Gilad can be brought home with a national and international effort....

Today, this minute - let the world say to Gaza - you have 24 hours to return Gilad Shalit or you will be removed from the United Nations, all aid suspended....

If you don't know who Gilad Shalit is, you can "google" his name, and read how he was kidnapped by Hamas.

Gilad must be brought home. Keeping him and his family in my thoughts and prayers; today and every day.

Or the Israelis could say you have 24 hours to deliver to us Schalit alive and unharmed or we will destroy every inch of Gaza.