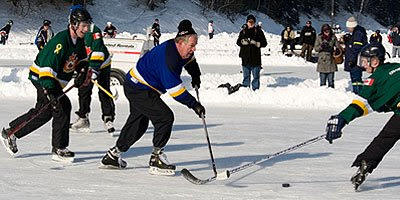 Miramichi, New Brunswick — Few of us get the opportunity to play a game of pond hockey against former NHL legends. Soldiers from CFB Gagetown did exactly that at the 5th annual Miramichi Rotary Pond Hockey Tournament held at French

Ocdt Mike Harty cuts a tight corner during one of the pond hockey games played at French Fort Cove.

A highlight of this year’s event was the presence of retired NHL players Brad Park, Terry O’Reilly and Don Marcotte.

Three teams from CFB Gagetown tested their skills against teams from across the country while playing against these former NHL greats.

“This is awesome, when will I ever get to do this again?”” said Master Bombardier Pete Sova after a game with former Boston player Terry O’Reilly, whose number was retired by the Bruins in 2002.

“The Gagetown team is pretty good,” said Mr. O’Reilly. “They’re younger, stronger and in better shape, other than that, I thought we had them!”

Pond hockey is played with four people on each team without any formal positions and places more emphasis on skating and puck handling ability than on shooting and checking. This tournament featured six different divisions with children as young as 10 years of age eligible to play but with upper age limit.

Games recorded for overseas troops
Not everyone on ice level was actually a participant in the tournament. Students from School District 16 were on hand with video cameras to record the games for future viewing by troops deployed overseas.

“It makes people, soldiers out in Afghanistan feel closer to home,” said Grade 12 student Ashlee Arbeau, whose cousin has just returned from Afghanistan.

Lt Jean-Raphael Fleury chats with former NHLer and member of the Hockey Hall of Fame, Brad Park. For former New York Ranger Brad Park, an event like this allows civilians and soldiers to socialize because it brings all members of the community together. Otherwise, military personnel are often either on base or deployed on operations.

“It’s good to see them in uniform, it’s a great interaction and I think people should see it more often,” said the Hockey Hall of Fame member. During the 1970s, Park was runner-up four times for the Norris Trophy, which is awarded to the NHL’s best defenseman. Each time, he had lost out to Bobby Orr.

Proceeds from the annual tournament are used to finance Rotary Club projects.

For more on the Miramichi Pond Hockey tournament, visit their website at http://www.miramichirotarypondhockey.com/index.html