Over at Tanker Bros, Aussie_Chic has a post up about Australia: 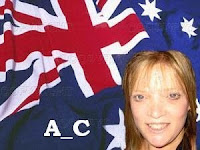 This image has more than likely been sent to every Australian, everywhere. The first time I saw it I could do little but stare, tears streaming down my face as they have a million times over the last 2 weeks.

This aside, Koalas are also savage creatures. Despite their cute appearance, they have sharp claws and bad tempers. Our 'Angels in Yellow' as our CFA and CFS have come to be known, must have seemed like Angels to this poor Koala also for him to have trusted them this way.

This picture became a symbol of the suffering felt by so many during the recent fires that have become known as 'Black Saturday'.

The Memorial Service for the National Day of Mourning for those lost and affected by the Black Saturday fires has just finished, live feeds to our TVs have ended. Amazingly, I feel a sense of new beginnings now. The Service was extremely tasteful, VERY Australian and did give a sense of our great pride in our nation and those who make it what it is.

Since the fires began that terrible saturday, Feb 7th there has been a massive outpouring of grief from throughout the world. I would like to take this opportunity to thank those who emailed to make sure I was ok and to pass on their messages of support for my fellow Australians so gravely affected by this terrible event. To all of you who sent emails, left messages and ECards I can not thank you enough for your kind thoughts. For those of you I haven't had a chance to get back to I am roughly 8 hrs from the fires and safe. The fires that continue to burn are burning in the opposite direction....

I have been following these events with a heavy heart. The photos of the fires are just heartbreaking. I keep going back to the photos of the koala drinking water from a bottle. Poor little thing is a symbol of all the creatures who died or will suffer from the lack of habitat.
God bless the Aussie families who have lost so much.