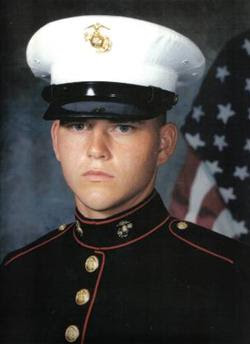 On September 5, 2009 the 1st Marine Division Association and Chapter 785 of the Vietnam Veterans of America will be holding the first annual "American Honor Run" to raise money for the Construction of a Fisher House, Support of the Intrepid Foundation and to provide scholarships for the son’s and daughter’s of those who have given everything for our freedom. For more information contact theunit@cox.net or visit www.thehonorrun.org
This month’s featured hero is the fine young Marine in the photo [above]. The run will be dedicated to the memory of one new hero every month to insure we remember all they have given for all of us.
Donald C. May Jr. always wanted to be a Marine.
His mother, Brenda R. May, of Chesterfield County, was a Marine. His father, Donald C. May Sr., was awarded a Bronze Star, two Purple Hearts and the Navy Cross for his service as a Marine in Vietnam.
Staff Sergeant May, United States Marine Corps, Unit: 1st Marine Division was 31 years of age when he died defending our freedom. The tank he was commanding plunged off a bridge as it was crossing the Euphrates River. It was later found upside down and under water. According to his mother, another proud Marine, her son and his crew disappeared during a sandstorm that swept over Iraq as U.S. forces advanced toward Baghdad. SSGT May's Memorial Web page can be found at
http://donaldcmayjr.memoryof.com/About.aspx
Staff Sgt May left behind a wife and three beautiful children.
THIS IS YOUR OPPORTUNITY TO INSURE THAT THIS FINE YOUNG AMERICAN IS NEVER FORGOTTEN FOR WHAT HE GAVE IN DEFENSE OF OUR FREEDOM. IT IS ALSO YOUR CHANCE TO LET HIS WIFE AND CHILDREN KNOW HOW HIGH WE ALL HOLD HIS GALLANT SERVICE AND WHAT A HERO HE AND SO MANY OTHERS HAVE BEEN.
Please make a donation NOW to help us honor the memory of Staff Sgt May Jr. and to show his family how much you care. His legacy of service will continue forever helping those members of our armed forces who so desperately need our support. Join us on 5 September 2009, in Oceanside, California, for the California Honor Run, dedicated to the memory of Staff Sgt. Donald May Jr.: a fine example of "The Few, the Proud, The Marines."

Donating through this website is simple, fast and totally secure. It is also the most efficient way to support my fundraising efforts.

Many thanks for your support and Semper Fi. (here)

This is such an important project, which only goes some small way to showing our heroes - and their precious families - that we support them. Don's wife, Deb, is raising their three children:

JACKSONVILLE, N.C. — In a Marine bar near Camp Lejeune, a blond woman handed a beer to the man drinking black coffee. She liked his Irish accent, which he admitted was phony, and his smile, which was genuine. It was the same big grin that blazed out of so many childhood photographs in which the crew-cut youth dressed like the Marine he since had become.

The love affair of Deborah and Donald May began in September 1999 as a happy collision of two hearts. It ended March 25, 2003, during the first days of the Iraq war, when the tank commanded by Staff Sgt. May, 31, plunged into the Euphrates River and sank to the bottom. He and his three tankmates drowned, trapped inside.

In less than four years together, the Mays had married, moved to the Marine base at Twentynine Palms, Calif., had two sons and were raising Deborah's daughter from her first marriage. Their talk, their letters, were filled with life and love....(USA Today here)

Don has three beautiful children--- Mariah, Jack, and Will. Mariah has so many memories of Don...he would walk her to the bus stop every chance he got, he would tease her endlessly, and tuck her into bed using his special "Daddy" technique. She talks about him with a big smile on her face, "Remember when Daddy......" Jack is a Mini-May. So very much like Don in his easy going nature. And he has that same "I can smile and get away with anything" attitude. And Will....never seen by Don here on Earth....has Don's eyes. He is the only one of the children that has Don's beautiful blue-green eyes. The children will forever be a reminder of Don and his easy-going spirit and love. We love you too much Don.... (source) 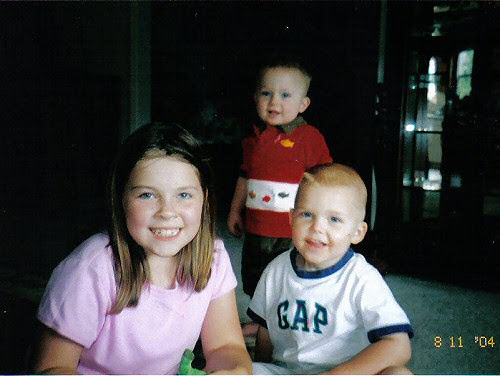 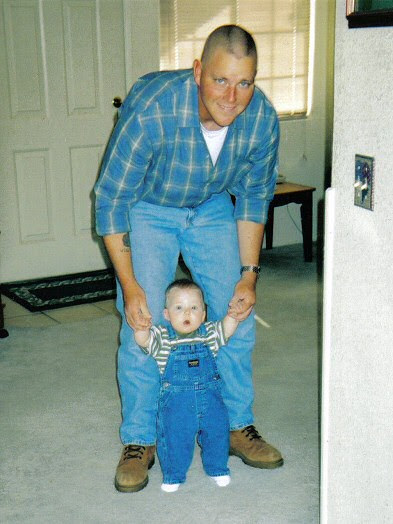 In the photos are Staff Sgt. May's three children: Mariah, Jack, and Will (who was born two months after his father's death.) (photos courtesy Fallen Heroes Memorial here)

Please check out the links to the American Honor Run and do whatever you can to support Staff Sgt May's family. Thank you.