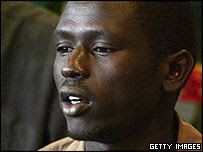 I think everybody knows how 'annoyed' I have been over the years, listening to the UN etc etc continuously debating the situation in Sudan. I have often bemoaned the fact that the time for talk for Sudan is long past, and the world needs to act. Of course, we all know that the world needs to give a damn before they can make a difference.

Today, I listened to an interview with Emmanuel Jal. I confess I had never heard of him, but his is a face to put to the misery that is Sudan. His life journey would have destroyed a lesser person, but to hear him talk, is to know that within him is hope for the world.

Emmanuel Jal was only eight when he learnt to fire a gun. By the age of 12 he was fighting on the front line of Sudan's 21-year civil war. He once contemplated cannibalism to survive starvation and drought.

Jal is now one of Kenya's best-known musicians and wowed the British crowd earlier this month when he sang at the Africa Calling concert as part of the Live 8 campaign to end poverty in Africa.

In his hit song Gwaa, he sings: "I can't wait for that day when I'll see no more fears, no more tears, no cry.

"No tribalism, no racism in my motherland when my people go back home to their motherland Sudan."

Now 25, Jal was only four when war broke out in southern Sudan.

After his mother died, Jal was rounded up with thousands of young children by the SPLA rebels and ordered off to school in Ethiopia. As the fighting intensified Jal set off with thousands of other children towards Ethiopia - a journey of some 600km.

"Some of us were eaten by wild animals. There was not enough water - when we got water, some would dive into the water and drink and they died because they drank too much water," he says.

When they reached Ethiopia, Jal and thousands of children were taken into refugee camps.

The camps offered food, safety and schools for the children. But the camps also acted as a recruiting ground for the SPLA. (read more of this on BBC here)

Emmanuel is a hip hop artist now; he has a new album out, a book, and there is a documentary too. He is on tour. On his site it says:

Emmanuel Jal was born in war-torn Sudan, and while he doesn’t know exactly when, he believes it was in the early 1980s. He was taken from his family home in 1987 when he was six or seven years old, and sent to fight with the rebel army in Sudan’s bloody civil war. For nearly five years, he was a “child warrior,” put into battle carrying an AK-47 that was taller than he was.

By the time he was 13, he was a veteran of two civil wars and had seen hundreds of his fellow child soldiers reduced to taking unspeakable measures as they struggled to survive on the killing fields of Southern Sudan. After a series of harrowing events, he was rescued by a British aid worker (Emma McCune) who smuggled him into Nairobi to raise him as her own.

To help ease the pain of what he had experienced, Emmanuel started singing. In 2005, he released his first album, Gua (”peace” in his native Nuer tongue), with the title track broadcast across Africa over the BBC and becoming a number one hit in Kenya. Gua also earned him a spot on Bob Geldof’s “Live 8″ concert in the UK. (Check out his site here)

During the interview I heard, Emmanuel said he "...wants to make a difference..."

From where I sit, if more political leaders really gave a damn, little boys - anywhere in the world - would not have to see the world through the childhood eyes of boys like Emmanuel.

He IS making a difference. Thank you, Emmanuel.
Posted by The Brat at 4:44 AM