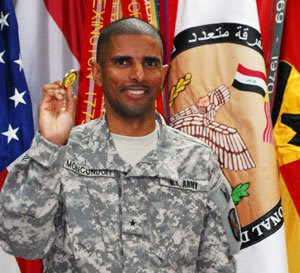 
BAGHDAD — Four weeks to the day after the inauguration of America’s first black president, the Louisiana National Guard promoted its first black officer to the rank of brigadier general.

Owen Monconduit, the commander of the 225th Engineer Brigade, received his first star during a ceremony here on Camp Liberty, Feb. 17.

“This honor is bigger than me,” Monconduit, of Pineville, La., said. “Many great Soldiers have come before me to allow this event to take place today, and many more will follow.”

February is Black History Month, a time to remember those who paved the way for equal opportunity for all.

“I am proud of the National Guard, Louisiana and our country for the progression of equal opportunity for all races and genders,” Monconduit said. “The first bill President Obama signed was the Lilly Ledbetter Fair Pay Act. Louisiana just elected the first Vietnamese U.S. Representative, Anh Cao, and last year the first governor of Indian decent, Gov. Bobby Jindal. This is a sign of our times, moving forward on equal ground.”

A veteran of Operation Enduring Freedom, he commanded the 528th Engineer Battalion from Monroe, La., through a year-long tour to Afghanistan in 2005 before leading a battalion for six months on state-active duty for Hurricanes Katrina and Rita.

“The National Guard is a great organization – it’s a value-based organization and it certainly expresses equality and has many opportunities available for any young person that is interested in the military,” Monconduit said. “It’s a humbling experience to achieve your dreams. But through perseverance and hard work, it pays off.”