Pooh Bear is back! 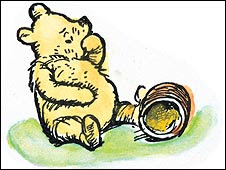 A piece of good news that I have been waiting to share:

Comeback for Pooh after 80 years

The late AA Milne's beloved children's character Winnie the Pooh is set to return to bookshelves, 80 years on from his first literary appearance.

The Bear of Very Little Brain will make his comeback in Return to the Hundred Acre Wood, the first authorised sequel to Milne's original 1920s stories.

The book - written by David Benedictus with illustrations by Mark Burgess - is out in the UK and US on 5 October.

The new book has the blessing of the A A Milne and E H Shepard Estates.

Shepard, who died in 1976, drew the famous illustrations for Milne's 1926 book Winnie-the-Pooh and its 1928 follow-up, The House at Pooh Corner.

In December a collection of his original drawings fetched £1.26m at auction in London.

"We have been hoping for a good many years that we might one day be able to offer the world a sequel which would do justice to the original Winnie-the-Pooh stories," said Michael Brown of the Trustees of the Pooh Properties....(BBC here and a great video clip, too!)

(All these pictures from a really cool site that has all sorts of neat Pooh Bear related items..here)

Now I am not saying that a love of Pooh Bear will cause world peace to break out, BUT seems to me that if more than a few politicians - of all stripes - spent some time in Pooh's 'Thotful Spot', the world would be a better place.

Back to your regular programming.

Everyone can tap their temples and "think think think". I know I do!