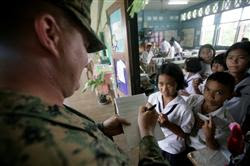 SATTAHIP, Thailand-U.S. Marine Staff Sgt. James Stinnett, 31st Marine Expeditionary Unit civil affairs specialist, writes his name in English for a student at Ban Khao By Si School as her fellow students wait their turn to get Stinnett’s “autograph.” More than 150 31st MEU Marines and sailors gathered here and at nearby Wat Som Nak Katon School to offer their time, friendship and more than 80 boxes of clothing, backpacks and toys during a community relations event held in conjunction with Exercise Cobra Gold 2009.,
Cpl. Cory Yenter, 2/20/2009 11:41 AM

SATTAHIP, Thailand —After 10 days at sea, followed by 10 days of hard work and tough training with Royal Kingdom of Thailand service members, Marines and sailors with the 31st Marine Expeditionary Unit were granted a well-deserved break and released for four days of rest and relaxation in Pattaya, Thailand. While many soaked up every moment of available fun in the sun, more than 150 MEU members sacrificed a few hours of their personal time to continue working alongside their Thai counterparts to serve the people of Thailand one last time before departing the tropical nation.

The men and women of the MEU joined forces with members of the Royal Thai Navy and Marine Corps to help more than 550 elementary school children attending two schools in Thailand by donating more than 100 boxes of clothing, backpacks, toys, teaching English, playing soccer, and sharing smiles.

“The purpose is really three-fold,” said Bailey. “The highest priority is to serve as ambassadors for the U.S. Naval services and enhance international relationships between the U.S. and Thailand. It also allows the Marines and sailors a chance to serve unselfishly to help out those in need, while they themselves are blessed and encouraged by it.”...

Coming to an msm front page near you! Okay, just kidding ~ but you can read the rest of this great B*N*S*N story here.