Daniel Pearl and the Normalization of Evil 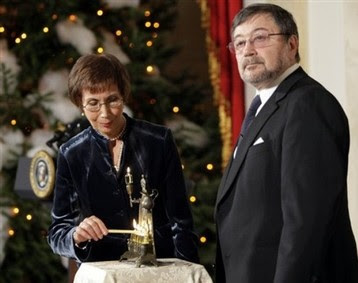 Judea Pearl, right, and his wife Ruth Pearl, left, light their family Menorah to mark the Jewish holiday of Hanukkah, in a Hanukkah Reception in the Grand Foyer of the White House, Monday, Dec. 10, 2007, in Washington. (source)

The title of this post is the title of a column written by Judea Pearl, the father of murdered journalist Daniel Pearl. It appeared last week in The Wall Street Journal, seven years after Daniel Pearl looked into the face of evil, as they murdered him. Read on:

Daniel Pearl and the Normalization of Evil

When will our luminaries stop making excuses for terror?

This week marks the seventh anniversary of the murder of our son, former Wall Street Journal reporter Daniel Pearl. My wife Ruth and I wonder: Would Danny have believed that today's world emerged after his tragedy?

The answer does not come easily. Danny was an optimist, a true believer in the goodness of mankind. Yet he was also a realist, and would not let idealism bend the harshness of facts.

Neither he, nor the millions who were shocked by his murder, could have possibly predicted that seven years later his abductor, Omar Saeed Sheikh, according to several South Asian reports, would be planning terror acts from the safety of a Pakistani jail. Or that his murderer, Khalid Sheikh Mohammed, now in Guantanamo, would proudly boast of his murder in a military tribunal in March 2007 to the cheers of sympathetic jihadi supporters. Or that this ideology of barbarism would be celebrated in European and American universities, fueling rally after rally for Hamas, Hezbollah and other heroes of "the resistance." Or that another kidnapped young man, Israeli Gilad Shalit, would spend his 950th day of captivity with no Red Cross visitation while world leaders seriously debate whether his kidnappers deserve international recognition...

This is an important piece of work, and should be read by every politician who adheres to the "let's all hold hands" school of 'diplomacy.' Go read the rest here.

I don't need to tell you all that others of like mind have something to say. From Tygrrrr Express comes this:

Judea Pearl and the Normalization of Evil

Maureen Dowd of the Jayson Blair Times once tried to justify the hatred emanating from Cindy Sheehan by declaring her viewpoint to be “morally absolute.” After all, she was a grieving parent. No parents should witness their children predecease them, but no one person can and should speak for everybody. Maureen Dowd and Cindy Sheehan both may wish to listen to Judea Pearl.

Judea Pearl is a computer science professor at UCLA. I have no idea what he looks like, and I doubt many people would recognize this average, everyday American. Yet Judea Pearl is the father of Daniel Pearl, the man butchered to death by genocidal Islamofacists simply because he was Jewish.

Most of us will never understand the pain that Judea Pearl will never escape. His opinion may not be absolute, but I certainly care about what he has to say more than most people.

His recent article in the Wall Street Journal is entitled, “Daniel Pearl and the Normalization of Evil.”

The article should be read over and over again until anybody who doubts the existence of true evil becomes a believer.

America, Israel and the rest of the West are locked in a life and death struggle. On the American side is civilization. On the other side is barbarism. If civilization loses, we will all end up like Daniel Pearl, one way or another.

For those who think I am using the tragic death of a young man to scare the daylights out of people, may God and Judea Pearl forgive me if I am acting wrong....

As always, Eric has much more to say. Go reads the rest of his piece here.

Yankeemom also has lots to say. A couple of excerpts:

...And I don’t know which disgusts me more, the people carrying out these acts or the people making excuses for them.

Judea Pearl and his wife lost their son in one of the most horrific ways possible and yet people (one of them a former President of this country, for God’s sake!) are still blaming everyone and everything else but those who are the actual doers of such evil.

Our very own troops are considered by too many citizens of this country as the real terrorists, murderers and evil-doers. And they don’t want to hear any different...

Why is it that all those supposedly champions of human rights aren’t screaming for justice for the murdered, instead of fighting for the ones who carried out such evil? That to me is evil in itself.

Yes, I use the word “evil” because I believe in evil. I have seen evil in my own lifetime. You cannot reason with evil. You cannot appease evil and you sure as hell can’t expect evil to disappear just because you say you’re sorry for whatever imagined injustice they charge you with...

Yankeemom always makes sense to me, and I suggest you go read the rest of this piece here.

We live in perilous times, when America's public SERVANTS (yes, they are supposed to serve YOU!) seem to be willing to disregard the murder of American citizens such as Daniel Pearl.

Take the time to read all of these items, and then think about how YOU want your employees (ie politicians who you elected) to conduct their dealings with self-proclaimed murderers.

Now is a very good time - I reckon - to be making your views heard loud and clear. Get on it, so people like Daniel Pearl can rest in peace.

Let us never forget.
Posted by The Brat at 4:44 AM