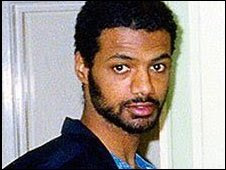 At 9am today, I got an email from Family Security Matters. It was an "action alert":

Binyam Mohamed said he wasn't planning on attacking the U.S., but if it waddles like a duck and quacks like a duck, it's probably a duck.

Several weeks after issuing the executive order that will close Guantanamo Bay by the beginning of 2010, it looks as though President Obama may be intent on emptying it well before the shut down date.
This week, he is expected to authorize the release of UK national Binyam Mohamed, who will return to the UK once the two governments have reached an agreement. Mohmed, who was captured in Pakistan in 2004, claims to have been tortured while in U.S. custody.
The media is all over his release and his allegations of torture while at Gitmo. However, they seem to be forgetting the reasons why he was taken into custody in the first place. Thomas Joscelyn, writing for the Weekly Standard, reminds us:

1. The detainee is an Ethiopian who lived in the United States from 1992 to 1994, and in London, United Kingdom, until he departed for Pakistan in 2001.
2. The detainee arrived in Islamabad, Pakistan, in June 2001, and traveled to the al Farouq training camp in Afghanistan, to receive paramilitary training.
3. At the al Farouq camp, the detainee received 40 days of training in light arms handling, explosives, and principles of topography.
4. The detainee was taught to falsify documents, and received instruction from a senior al Qaeda operative on how to encode telephone numbers before passing them to another individual.

At a minimum, therefore, we know that Mohamed has admitted being an al Qaeda-trained operative....

This unprecedented release of an enemy combatant, who has already targeted the United States, clearly shows that despite the promises that President Obama made to keep this country safe, he may be putting political promises ahead of our national security. The laundry list of charges against Binyam Mohamed, many of which he has admitted to, makes it blatantly clear that it is not if he will attack the United States, but only when his attack will happen.
By Mohamed’s classification as an “enemy combatant,” the United States is aware that he poses a threat to our country and allies. Instead of maintaining him in custody where justice can be served, President Obama is allowing him to be released to the United Kingdom without condition. This presents a danger that he may rejoin the fight to kill innocent civilians. This potential release is dangerous and must be reconsidered....

They do have more, which you can read here. Then they end with this:

However, this is all a moot point, because about the time I was reading this call to action, I find this on the BBC site:

Freed detainee arrives back in UK

[video of him stepping off the plane in England here]

A British resident detained at Guantanamo Bay for more than four years has arrived back in the UK.

Mr Mohamed says he was tortured while in custody on suspicion of terrorism.

He said in a statement the worst moment of his captivity was when he realised his alleged torturers were receiving material from UK intelligence agents.

Foreign Secretary David Miliband said his release was the first step towards the goal of closing down the Guantanamo Bay detention camp.

After he landed at 1300 GMT and walked to the terminal building surrounded by officials, he was questioned and released more than four hours later.

UK Border Agency officials are interviewing him about his resident status and he will have to apply for leave to enter the UK.

The Home Office said he would be given temporary admission until a decision is made.

You KNOW there is more, and lots of other aspects of the stories here.

So many troubling facets here. To read the BBC stories is to believe that Binyam Mohamed has been wrongly maligned, and was never an 'enemy combatant'. There is a precedent for this within Canada. Maher Arar is a Canadian who was stopped during a layover in JFK in 2002:

Arar was detained during a layover at John F. Kennedy International Airport in September 2002 on his way home to Canada from a family vacation in Tunis. He was held in solitary confinement in the U.S. for nearly two weeks, questioned, and denied meaningful access to a lawyer. The U.S. Government suspected him of being a member of Al Qaeda and deported him, not to Canada, his current home, but to his native Syria, even though the nation is known to use torture on suspects.[5] He was detained in Syria for almost a year, during which time he was tortured, according to the findings of the Arar Commission, until his release to Canada.[6]

Despite the Canadian court ruling, the United States government has not exonerated Arar and, on the contrary, has made public statements to state their belief that Mr. Arar is affiliated with members of terrorist organizations. As of February 2009, Mr. Arar and his family remain on a watchlist. ...(Wiki here)

Be that as it may, Binyam Mohamed and his almost clandestine removal from Gitmo, and arrival in Britain raises other issues. Just recently President Obama met with 9/11 and USS Cole families. Reports suggest that the president told them that he would proceed cautiously. He has in fact said that all options relating to the release of the Gitmo residents would be carefully and prudently examined.

Seems to me that there is nothing prudent about shipping this man off to Britain. If nothing else, it appears that Britain will now be embroiled - at the least - in ongoing demands for full public enquiries into their roles into this man's detention. His release to Britain (notice I do not say to his home country!) confirms that this US administration cares not at all for American public opinion in their rush to close Gitmo.

The FSM article says "if it walks like a duck..." Looks to me that the Obama administration is waddling and quacking like a duck at a breakneck speed. I forsee many more of the Gitmo residents quietly and rapidly shipped off to freedom. Is this the open and transparent justice Americans voted for?