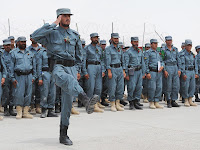 The first Afghan Uniformed Police (AUP) Officers have graduated from the British-run Regional Training Centre (South West) [RTC(SW)] in Helmand province, which has now passed out its 3,000th recruit.

The ten officers passed out in a ceremony in front of the Provincial Chief of Police and a number of local elders.

They were joined by 158 newly-graduated AUP patrolmen who now make up over 3,000 recruits that have completed training at the RTC(SW), which was established in 2009 to provide formalised training for the AUP.

All have completed an intensive eight-week course at the RTC(SW), which is currently being run by 2nd Battalion The Royal Gurkha Rifles (2 RGR) who work alongside MOD Police Advisors and members of the Royal Military Police to give the recruits a fully rounded education....