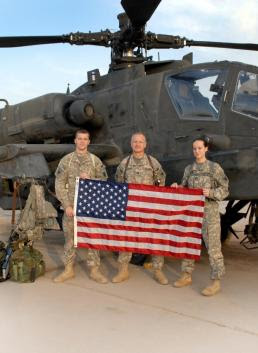 CAMP TAJI, Iraq – Having an AH-64 Apache attack helicopter pilot for your dad is pretty cool. Even cooler is being an Apache pilot and having two of your children follow in your footsteps to become pilots, too.

The AH-64 Apache is a mean machine, heavily armed with Hellfire missiles, 2.75-inch rockets and a 30 mm M230 chain gun. The aircraft is a formidable force in the skies of Iraq, performing such tasks as reconnaissance, convoy protection and air support for ground units.

The 8-229 ARB Flying Tigers and its Apaches are currently attached to the 40th Combat Aviation Brigade, which is on a yearlong deployment to Iraq in support of Operation New Dawn. The brigade is performing full-spectrum aviation operations in the country, and the 8-229 is its attack arm.

Capt. Dennis McNamara served 12 years in the active-duty Army before taking a full-time position at Fort Knox with the 8-229. After 11 years with the unit, he moved to California to take a job with the Boeing Corporation, while switching over to a Reserve unit based out of Los Alamitos, Calif.

Dennis was at home in Helendale, Calif., when he learned that his son and daughter were deploying to Iraq with his old unit.

“I couldn’t see both my children deploying and leaving me at home,” he said. He called the unit’s commander, Lt. Col. James Posey, and asked to rejoin the 8-229 for the deployment.

“Dennis McNamara and I have worked together for several years, so I considered it an honor to have his children serving in my command, and I welcomed his return to the unit,” Posey said. “When the chance presented itself for him to deploy with us, I was a little concerned with having over half the family in my unit, in a combat zone, and all flying the same aircraft! We quickly decided they could not fly together while here, but at least they could all serve in the same area together.”

Capt. Dennis McNamara has been flying Apaches for more than 20 years now. He served in Operation Desert Storm and in Operation Iraqi Freedom. But for his two kids, this deployment was their first.

Elizabeth and Brendon, who both call Louisville, Ky., home, said having their father with them has its advantages, giving them an extra “support element” while here. ...