SOLDIERS who took on the Taliban in Afghanistan paraded through Scottish streets to celebrate their homecoming.

The Royal Highland Fusiliers, 2nd Battalion the Royal Regiment of Scotland (2 SCOTS) held parades in Glasgow and Ayr to show their appreciation for the support the public have given them during their tour of duty in Helmand province. 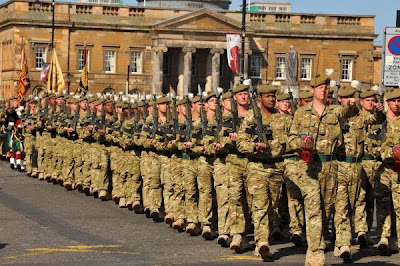 Every member of the regiment has served in Afghanistan in the past seven months, with the final few only returning to British soil this week. Every member returned as there were no fatalities on the tour.

Sergeant Stephen Carr said the mission had been tough but successful.

He said: “During my six-and-a-half months in Afghanistan I saw huge progress being made as we worked in partnership with the Afghan National Police.

“They have come a long way and it is very rewarding to see that the work being done out there has improved their skills.

For more (and pictures!) go here.

Email ThisBlogThis!Share to TwitterShare to FacebookShare to Pinterest
Labels: 2 SCOTS in Ayr