WTH is wrong with some people? Some of my regular readers in other places, know about my designation of some stories/events as *spit* worthy. These are stories that either leave me speechless, or enrage me so much that I dare not print my verbal reaction, so a *spit* has to suffice.

The reporting of this story certainly qualifies. Read on:

By MATTHEW CHAYES AND JOHN VALENTI 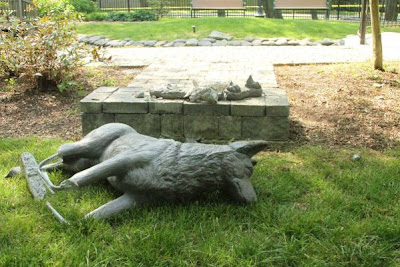 A 300-pound memorial to 9/11 rescue dogs, part of 9/11 Memorial Park in Lindenhurst, was discovered toppled on Friday morning. The statue was modeled on Hansen, a German shepherd who searched through the rubble of the World Trade Centers after the terrorist attacks on Sept. 11, 2001. Hansen died in 2004. (May 27, 2011) Photo Credit: Jim Staubitser

Retired NYPD officer Steve Smaldon said he was on the verge of tears when he found out that vandals had toppled a 300-pound monument to 9/11 rescue dogs in a Lindenhurst park.

The cement statue, modeled after Smaldon's now-deceased German shepherd who spent about 150 days with Smaldon searching through the rubble of Ground Zero, was the only thing damaged in the memorial park on Irmisch Avenue near Easton Street, officials said.

"It was 9/11, which to everyone should mean something," said Smaldon, 50, of Lindenhurst. "Why would somebody want to do this? It's like going into a cemetery," Smaldon said as he stood near the vandalized statue Friday morning.

The park has plaques dedicated to eight Lindenhurst residents, including FDNY firefighters Joseph Angelini and his son Joseph Jr., who died in the Sept. 11, 2001, terror attacks. It also has the statue modeled after Hansen, the rescue dog. A plaque for the rescue dogs says: "Trained to Save. Live to Serve."...

There is more, plus a short video clip of an interview with Steve Smaldon here.

As everybody knows, our Canine partners worked tirelessly alongside their humans in the aftermath of the terrorist attack on 9/11. Much has been written about their heroic efforts, that took a huge toll on both the mental and physical well-being of these dedicated 4 legged searchers.

I couldn't find a picture of Hansen, but I did find many articles, tributes, to our 9/11 furry heroes. There is a beautiful picture gallery of some of them here.

Long Island police are hunting the vandals, and they WILL catch them, of that I have no doubt. There is also a $500 reward offered for information.

From the Lindenhurst Patch:

A Vow to Rebuild Damaged 9/11 Monument

[...] the statue of Hansen – the patrol and search and rescue dog who served with former Lindenhurst Fire Department Chief and former NYPD Canine Officer Steve Smaldon – stood as a reminder of all of the dogs who worked to find people and then remains at Ground Zero in the months after the WTC fell.

Smaldon had the statue built with his own money a few years ago, and with the consent of the Lindenhurst Remembers 9/11 Committee, it was installed at the garden during the annual commemoration three years ago.

“The dogs who worked at Ground Zero gave people – firefighters, police officers, families – who were there a good feeling in the middle of all of the tragedy. They always showed up with a wagging tail, ready to work,” said Smaldon, who also responded with Hansen after Hurricanes Katrina and Rita. Hansen passed soon after that.

Both Smaldon and Madlon – who co-chairs the Lindenhurst Remembers 9/11 Committee – are committed to replacing the statue.

“Even if I have to pay for another one myself,” said Smaldon, who’s already received calls from people looking to help and donate.

"Why would somebody want to do this?" I don't have the answer to that either. I DO know that whoever did this destruction of a Memorial honouring the vital role of our 9/11 K9 heroes is a lower life-form than any one of the K9's who gave of themselves post-9/11.

Lots more I could say, but that could get very ugly, so I'm going to leave it at: *spit*