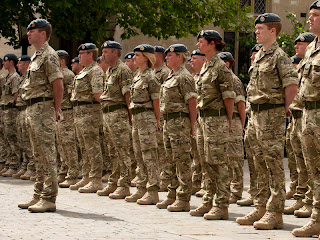 More than 100 Royal Air Force Police personnel marched through Bedford this weekend in their first ever public homecoming parade after six months serving in Camp Bastion.

No 2 (Tactical) Police Squadron (TPS) returned to their headquarters at RAF Henlow two weeks ago. Yesterday they proudly marched alongside other RAF Police colleagues back from their work supporting operations in the Middle East and the Falkland Islands.

For 23-year-old Corporal Nicola Lilley, based at RAF Leuchars, this was her first tour of duty in Afghanistan. She said:

"As Bastion Security Flight, we were part of the force protection element for both inside and outside the camp. I have been out on patrols with the US Marines, on medical outreach missions to Afghan women.

"I provided security in the compounds whilst the female medics went in to issue aid. I enjoyed interacting with the locals - you feel that you are making a difference."

Also taking part in the homecoming parade were RAF Police reservist personnel and four military working dogs with their handlers, representing some of the many and varied roles carried out by the RAF Police on operations around the world... 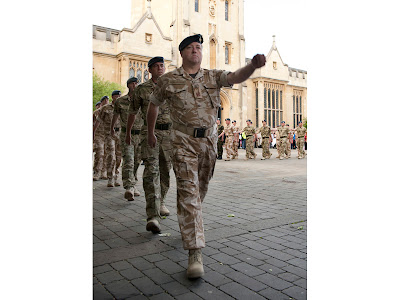