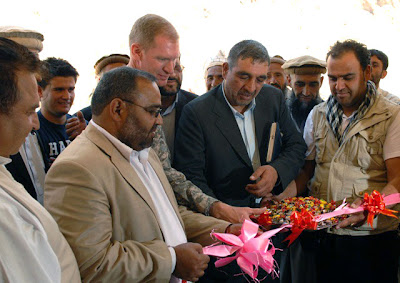 The school can host more than 150 Afghan female students and is a part of a three-school complex which includes a boy’s school.

The Dara Community Development Council, a group of Afghans who address the needs of their community, proposed the school to their local government, but there was no money to fund the project.

Hearing this, the PRT decided to take on the endeavour.

“I am very excited and happy that the Panjshir PRT opened the Baba Ali Girls School in this remote district of the Panjshir valley,” said Abdul Matin Mubashe, a math and sciences teacher for the Baba Ali School, through an interpreter. “The young girls of the Dara District now have a place to study and learn.”

“We have an Afghan-first or Panjshir-first policy, if we can find someone capable of doing a project within that community, then we use them to do the work,” said Air Force Lt. Col. Joseph Blevins, the Panjshir PRT commander. “The communities really tie in with the PRTs....

Much more on this great story here.

Email ThisBlogThis!Share to TwitterShare to FacebookShare to Pinterest
Labels: Red Bulls and girls school in Panjshir