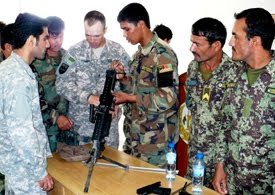 
The first "train the instructor" class trains ANA military instructors as the nation moves toward an independent military and peacekeeping force.

BALKH, Afghanistan (May 16, 2011) – A critical component of every nation’s national security is the ability to recruit and train people into competent soldiers to foster a self-sustaining military force.

The Regional Military Training Center – North, under the Afghan National Army Training Command, is hosting the first Train the Instructor class, charged with training ANA military instructors as the nation moves toward an independent military and peacekeeping force. The inaugural class graduates May 17.

The Combined Training Advisory Group, based out of Kabul, sent a team of two Afghan master instructors to teach ANA students with the assistance of Detachment 62, 95th Division mentors.

“The purpose of the course is to develop quality instructors through an ANA standardized instructor training program,” said Army Lt. Col. Francis Carr, RMTC-N director. “The product is a specialized instructor that is critical to build a self-generating ANA.”

The course provides the common foundation for all instructors across the ANA and uses a similar curriculum to the U. S. Army instructor course.

The training focuses on the basic instructional technique, such as lesson structure, practice lessons, evaluated lessons and general instructor knowledge such as ANA values, non-commissioned officer creed, duties, responsibilities, accountability, standards, stewardship and inspections; and more importantly how to deliver the information.

The class is taught by ANA master instructors, under the guidance of U.S. military mentors. This ensures a basic level of quality instructor and will help standardize the country’s budding military nationwide as the self-sustaining force develops...