When the news started hitting social media sites late the other night that Osama bin Laden had been killed by a team of US SEALs, my heart immediately went to the families I know and love who were so personally affected by OBL's act of terrorism on American soil on September 11, 2001.


The Founder of Voices of September 11 put out this statement:

President Obama's announcement tonight is a symbolic and moral victory for all humanity. As the founder of Voices of September 11th, and the mother of Brad Fetchet who was killed in the World Trade Center in 2001, I want to express my gratitude to the President, the CIA, the military forces and all others who assisted. Tonight, as we think of all our 9/11 families, we also remember the families of all the troops and intelligence officers who gave their lives in pursuit of Al Qaeda and the man known as the architect of 9/11. It renews our faith that good can conquer evil and all people can breathe free.

Keep America Safe, another group born of that terrible day, put out this statement:

Today marks a major victory for the people of the United States and the forces of freedom and justice all over the world. We are grateful for the bravery of the Americans who raided the compound near Islamabad and killed Osama bin Laden. We are also grateful to the men and women of America's intelligence services who, through their interrogation of high-value detainees, developed the information that apparently led us to bin Laden. The war goes on and al Qaeda continues to plot and plan against us. We must remain vigilant and we must continue to provide our men and women in uniform and our intelligence professionals all the tools they need to fight and win this war. Today, especially, we remember the brave Americans who have given their lives in the service of our nation and the nearly 3,000 men, women and children who lost their lives on 9/11. Justice has been done.

The Keep America Safe Board Of Directors

Debbie Lee sent out an email last night. I won’t quote the whole thing, but I was struck by the wonderful candor. Also just watched her on HLN along with a representative of the 9/11 families.

I have gone through a scope of emotions this evening as I learned that Osama had been killed. I received a text from a friend, “we have Osama.” I told my son Kristofer to turn on the news. I listened as I heard that in fact Osama had been killed and that we had the body and had confirmed it was him. I screamed jubilant, joyous screams for justice. I began shaking and thought of my son Marc who willingly gave his life fighting the war on terror which was lead by despots like Osama Bin Laden and Sadaam Hussein. If it wouldn’t have been for Osama I would have my son...

Go read the rest of this mother's words here.

As scant details were appearing online (and before POTUS released his own first official statement,) I called Ken Fairben, father of paramedic son Keith who we lost on 9/11. We talked, but since it was two friends talking, (and therefore obviously off the record,) I will not share that here. However, the next day I called Keith's mom Diane, and that was on the record, so I share her thoughts on OBL's death here. Diane said: 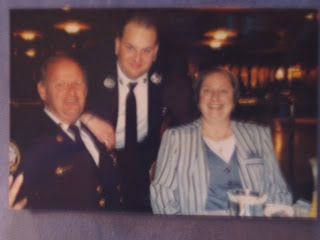 I'm okay, going through a mixed bag of emotions. Funny, I feel no reason for celebrating, I am afraid of the retaliation that will come. I always said it will make no difference if we kill him...it is far and widespread, and they will continue to carry out their attacks. It was a morale booster for sure for the military, and rightly so.,

Reminded that it was from intel they got from GITMO that led to this day.. The GITMO that Obama said he would close. In his speech Obama was pretty good. He zeroed in on the 9/11 families.

When I first saw pictures of Americans celebrating it bothered me at first. Ground Zero is sacred to me. But they were very respectful, and not at all like the celebrations that went on in the middle east after 9/11. I saw a lot of firemen there at Ground Zero and I felt better about it. But we all know this is not the end of the war. I am very afraid of retaliation.

In my neighbourhood everybody got there flags out; they are all flying the American flag.

What would Keith have been doing last night? He would have been out there, fists in the air, and in the bars celebrating. But for me, today? No, there is no closure.

Jack Delaney, Director of Emergency Services at New York Presbyterian Hospital, was Keith's boss on 9/11. He has his own personal harrowing story to tell of that day, which we will share another day, but we focussed on Keith for this piece:

I had just been home a short while when my son told me the news. Initially, I was relieved, and my next thought was that we had just totally annoyed the terrorists/OBL followers. I thought about post-9/11 middle east, and figure it was really going to piss them all off, seeing American celebrate.

Yes, I went down to Ground Zero, after grabbing a bottle of champagne. I went with one of my crew, and it was cops, Fire Dept, and some in military uniforms. It was very peaceful. Incredible. Breathtaking. Very emotional time.

I was thinking about OBL and how this day is a double-edged sword. He will now be viewed as a martyr, and his death will rejuvenate his followers. We need to pay close attention. Be prepared.

Keith? He would not be overjoyed at bin Laden's death. He was the type of gentle-man who did not believe in an eye for an eye. He was very forgiving.

Not really closure for the families, for any of us. No. Maybe a sense of justice.

Mickey Arnette is a Gold Star Mom. Mother of SSG Jason Arnette, who gave his all in Iraq on April, 1, 2007. (To read more on this Hero, go here) Jason - our very own 4 Star General- private family joke - rests in Arlington. 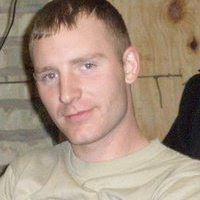 I have no idea how I am supposed to feel today. Do I jump with glee? I don't know. I feel kind of blah, in a daze. I do not want Obama to take credit for Osama's death. It is not about him. It is about our military who did this, and our military who have died to bring us to this day.

Is his death going to make a difference? Is this just the beginning? The kids are in more danger now than ever before.

No, Osama's death doesn't change anything for me. There is no closure. There will never be closure.

Obviously, all of our allies have been paying close attention to the events of the last few days.
A member of one of our coalition partners, active duty military, gave me permission to share something he wrote after he heard the news. I shall call him "Anon" as per his request.

As England awakes on a fine spring morning with Royal wedding hangovers and a sense of normality returning, Prime Minister Cameron arrives on TV complete with bed hair to express his thoughts to a nation.

Images of a dead Bin laden float about the internet and America is alive with a party feeling, a feeling which is long over due after so many of her soldiers have given their lives freely post 9/11 in the pursuit of freedom and the war on terror.

But what now remains, the sensible Americans steel themselves for further trouble which is as inevitable as salt and vinegar on chips.
As the less experienced Americans party at ground zero, Al Qaeda plan the next battle of the perceived crusade.

England welcomes the death with typical reserve, knowing that her already hard pressed intelligence agencies, Police Service's and Armed Forces deal not only with the international threat, home grown threat, but the resurgence of violence in Northern Ireland are going to be busy in the not too distant future. Very busy.

Meanwhile Monday bloody Monday continues with slaughter in Afghanistan as the spring onslaught begins, the Taliban blood lust raised by the news of their Spiritual leaders demise.

Yes, the cycle does, indeed, continue, and anyone who believes that we can bring our troops home, and the the war is over - as I have heard suggested in some quarters - needs to pay closer attention, as Jack Delaney so rightly says. The death of OBL is, of course, a moral victory, but our troops' mission continues, until we can victoriously says: MISSION ACCOMPLISHED.

Keeping all our deployed troops close to my heart. Standing with all our families of those who have given all in the ongoing global war on terror.
Posted by The Brat at 10:30 PM

Thanks for writing this and reminding everyone what OBL did, and how so many people responded to help. RIP Keith,Jason, and all the others. cjbsrn