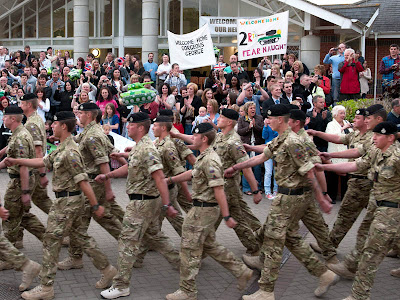 The final squadron from the 2nd Royal Tank Regiment (2 RTR) returned to its base in Tidworth, Wiltshire, this week after a successful six-month tour of Afghanistan.

The Tankies were welcomed back by their families, friends and colleagues on Saturday 14 May 2011 after playing a key role supporting British and Afghan troops with Mastiff and Warthog armoured vehicles in Helmand province.

Their return marked the end of 2 RTR's deployment across Helmand province, with a total of nearly 300 officers and soldiers involved in fighting insurgents, patrolling towns and villages, repairing schools, mentoring the Afghan National Police and even guarding a rock concert.

Soldiers from 2 RTR have been arriving back over the last few weeks and the return of 'Badger' Squadron saw the whole regiment safely back in the UK.

Soldiers from 'Badger' have been using the Army's newest armoured fighting vehicles, Warthogs, which have given them firepower, manoeuvrability and excellent protection.

"It is good to be home and be reunited with our families and friends. Badger has had a fighting tour and I am extremely proud of how the soldiers have fought over the past six months.

"We can look back with satisfaction on a hugely successful tour in which we have helped our Afghan partners develop and I believe we can be proud of what we have achieved.

"It has not been easy; we are glad that some of our wounded comrades were able to join us for decompression in Cyprus and we really enjoyed seeing them all again.

"We have been working away from the regiment for a long time now and we are looking forward to being back as part of the 2 RTR family again. But most of all it is time for us to thank our families for the support they have given over the tour.

"It has been tough for us, but we know the battle at home is just as tough. We are immensely grateful for the patience and support of all those at home who have kept us going through our time in Helmand." [MoD here]

Email ThisBlogThis!Share to TwitterShare to FacebookShare to Pinterest
Labels: 2 RTR Home from Afghanistan