I did wonder whether I was too old for all this… 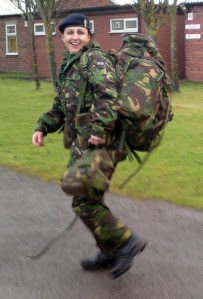 Soldier under Training (SuT) Donna Jones is a Territorial Army (TA) soldier training to be a Vehicle Mechanic with 119 Recovery Company, Royal Electrical and Mechanical Engineers (REME). She is currently undergoing Phase 1 Training, which for TA soldiers spans two courses. The first of these takes place over 6 weekends and is known as ”Trained Soldier Course (Alpha)”. In civilian life SuT Jones is a hairdresser and beauty therapist – so what does she make of training becoming a soldier?

I knew a little of what life was like in the Army, so wasn’t going in totally blind – my years spent in the Army Cadet Force as a kid had given me a good insight. But that was a long time ago – I’m now in my mid-30s. When I sat my A-Levels I intended to to go straight into the Army – I passed the basic fitness text and selection, but for some reason I never made it any further. One day I came home from school and told my mother that I was going to work in the beauty industry instead. But it has always been at the back of my mind to join, and as I am now too old to join the regular Army, the TA was the next best thing.

I arrived at the Regional TA Centre, my home for the weekend, on Friday night at 2000hrs. The driver from my unit left, leaving me behind along with another new SuT. We were given keys to our accommodation blocks and told to return at 2130hrs. By that time I’m normally snuggled up in my PJs and dressing gown!

I was the first female to arrive in the block. The Regional TA Centre is used solely for training, and it was beyond basic. The bunks looked like they had seen better days and the whole place was in dire need of a clean. The first girl arrived, and she was just as nervous as me. We unpacked our gear and put it away in our lockers – which didn’t actually lock – just as the second girl arrived. We heard her coming – she was loud and Scouse, and didn’t stop talking. But we didn’t have much of a chance to talk as we had to go back out for 2130hrs...

Go read the rest of this great story about SuT Jones, here.