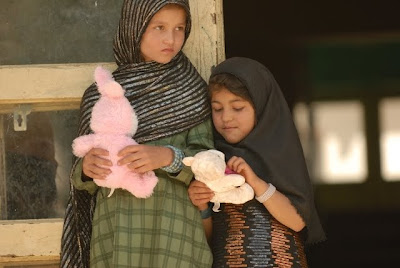 Children at an orphanage in Charikaar, Afghanistan, recently received hundreds of donated shoes and other necessities thanks to Iowa National Guard soldiers and Sioux City middle-school students.

The donations were collected by students at West Middle School in Sioux City, according to an Army press release. The students' English teacher is Christine Poeckes, whose son, Ryan Downs, is a sergeant in the Guard's 1-113th Cavalry Squadron. Poeckes initiated a similar donation drive for Iraqi children when Downs was stationed there five years ago. After he was deployed to Afghanistan, she offered to do it again.

Poeckes said she suggested that for a service-learning project, her students raise donations for Afghan kids. The details were set after one of her students came in one day with a newspaper picture that showed two shoeless Afghan girls watching U.S. soldiers go by....