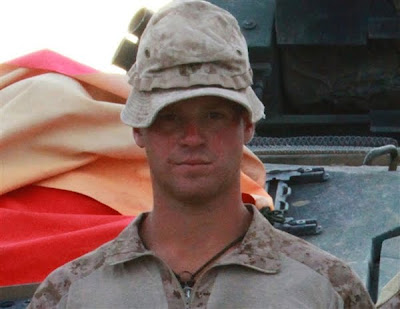 FORWARD OPERATING BASE PAYNE, Afghanistan, May 5, 2011 – For much of their deployment, Marines of the 3rd Light Armored Reconnaissance Battalion have found an insurgent force that was reluctant to fight them toe to toe. Rather, the enemy has relied more on improvised explosive devices and indirect fire.

But on April 20, Marine Corps Lance Cpl. Jesse K. Knerr, section leader for the battalion’s 3rd Platoon, E Company, and a native of Portland, Ore., found that when insurgents have their backs against the wall, they are left with no choice but to fight.

The mission of the day was to search an area that hadn’t yet been explored by coalition forces but was suspected of being a site for insurgent fighting positions.

When Knerr and his fire team patrolled the area, they found structures made of rock that blended into a mountain ridge. This differed from the buildings they were accustomed to seeing, which mainly were mud huts.

Knerr signaled for his team to search the structures, where they found battery packs, rocket-propelled grenades, enemy propaganda and half-eaten meals that were still warm. After radioing in the intelligence, Knerr and his team followed a trail that led up the ridge to a small cave with an even bigger cave about 100 yards above it.

As they walked up the ridge, the team found fighting positions all along it. Suddenly, they began taking small-arms fire from insurgents in the bigger cave, only about a football field’s distance away from their positions.

The fire team immediately found cover. At around 4:30 p.m., Marine Corps Staff Sgt. Yobani Tejada, the platoon sergeant, got a radio call from Knerr stating that his team was engaged by enemy fire on the ridge.

Tejada, who was in a light armored vehicle at the bottom of the mountain, told the Marines to find cover so they could provide fire from their turret and call in air support.

Knerr realized he had to come up with a plan that would get his Marines out of there safely. Spotting an area that supplied sufficient cover, Knerr directed the Marines to suppress the enemy’s fire while each of them advanced toward the area....

MUCH more on this Every Day Hero here.