Yes, I AM totally annoyed! Take a look:

Compare and contrast (as we say in academia): 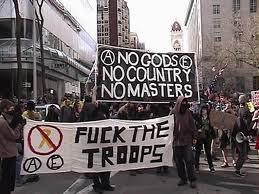 From one of the never articulate "Occupy..." protests

Madison Rising is a pro-Military, Patriotic rock band who applied for - and was denied - a permit to perform in Zucotti Park. Zucotti Park has been the site of 'protests' against........well who the hell knows? The protesters themselves have exhibited what can only be described as disgusting, anti-social, behaviour that has added nothing to the 'civil discourse' so absent in some circles in America. The ugly American has been on full display, aided and abetted by the msm, supported by the MIC in the White House, plus other politicians. Oh, and no, none of the squatters at Zuccotti Park felt the need to apply for permits to congregate and defecate on, and destroy, public property.

A patriotic rock bank describing themselves as pro-Capitalism and anti-Occupy say they were denied permission to perform this week at Zuccotti Park, the site where the anti-Wall Street protesters are holed up.

“We wanted to get a legally properly permitted concert together to say thank you to the hard working men and women on Wall Street and also to say thank for all that the New York Police Department and the Fire Department of New York had to put up with for the last couple months with these Occupy guys” said Dave Bray, the lead singer of the band, Madison Rising.

“We want to say thank you but we can’t even do it legally with the proper permit. But anybody who wants to bash America, it seems like they can stop on down to Zucotti and poop all over cop cars,” said Bray, speaking yesterday in a radio interview.

“Brookfield respectfully declined the request for a permit and is currently not permitting any staged concerts in the park,” he told KleinOnline.

Can we say 'double standard'? Yes, we can!

On Madison Rising's site, there is this about the band:

Right there is the problem! Those values are the complete antithesis of the Occupy 'values' we have seen from the morons.

Doing research on Madison Rising, I found a great write up on them:

From The Daily Caller:

Lead singer David Bray described the band as a “war drum for patriotism”: a constant and uninterrupted pro-American message...

Talking liberal media bias? They have a great song about that, too: Where Was The Media Then? Go, listen!

Go check them out on their home site.

In a press release, after they were thwarted in their attempts to follow legal requirements to perform (you know, unlike the Occupy crowd) Madison Rising said this - in part:

Madison Rising, a rock band that released its debut album last month, is fueled by an eternal gratitude and love of our country. “Right now, ignorance and apathy are running wild amongst our citizens. Right now, we need to get people thinking about issues that really matter. We hope Madison Rising will inspire that,” said Dave Bray, Lead Vocalist, Military Veteran.

"...eternal gratitude and love of our country...."

*gasp* No wonder they weren't allowed to perform in Zucotti Park!

Madison Rising has a FaceBook page, and they have absolutely AWESOME music on there.


Trust me when I say that you will LOVE the tracks they have on their FB page! Check it out!

Zucotti Park may have denied Madison Rising a venue to play their music, spread their pro-Military, Patriotic message, but I predict that this amazing band will be in far bigger venues in the future. Zucotti Park? Pffffft!

OK, Brat. You know I confuse easily!!!! Who refused the permit OWS or the City of NY??

So not fair but nothing surprises me about this country anymore.
Donna
Proud Army Mom

In 2012 the veterans vote was evenly split by Obama and Romney.according to Fox News Exit Polls 2012 However the younger veterans voted for Obama and the older for Romney
Young vets from Afghanistan and Iraq vote Dem