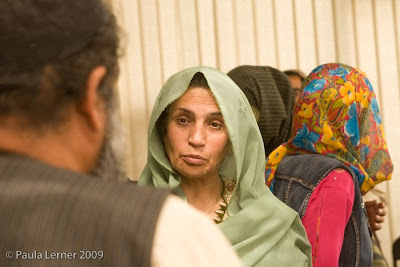 A leading female Afghan politician was shot dead yesterday after leaving a provincial council meeting in Kandahar, southern Afghanistan, which her colleagues had begged her not to attend.

Sitara Achakzai was attacked by two gunmen as she arrived at her home in a rickshaw - a vehicle colleagues said she deliberately chose to use to avoid attracting attention....

There have been many other attacks on women in the province, including the assassination in 2006 of Safia Amajan, the head of the province's women's affairs department.

Malalai Kakar, a top policewoman in the city, was killed last September, and schoolgirls have had acid thrown in their faces as punishment for attending school.

Achakzai had put herself at the forefront of the women's rights struggle in Kandahar, and last year organised a "prayer for peace" demonstration in one of the city's biggest mosques on International Women's Day.

About 1,500 women attended the event, although this year the women were banned from entering the building and instead held a meeting at the city's human rights commission.

Ahmed Wali Karzai, head of the Kandahar provincial council and brother of Afghanistan's president, Hamid Karzai, said he had seen Achakzai earlier in the day before she was murdered, and had granted her leave from her duties so she could visit a sick relative in Canada.

"I had just said goodbye and joked that it was a good time to leave because our offices have been totally destroyed and need to be rebuilt."

Karzai added that Achakzai had for the past two years held the post of secretary in the provincial council, which, until her death, had four female members of the 15-strong body. She was married to an academic who taught at Kandahar University.

Wenny Kusama, country director of the United Nations Development Fund for Women, said the murder of Achakzai was an attack "on all freedom". [source: Guardian.co.uk here]

...Gunmen killed Sitara Achakzai outside her home in Kandahar city and then drove off, said Matiullah Khan Qateh, police chief of Kandahar province.

Four men drove up on two motorcycles and shot Achakzai as she was getting out of her car, he said.

A family member told The Canadian Press that Achakzai's 99-year-old mother and sister live in Markham, Ont., northeast of Toronto.

Achakzai, a dual German-Afghan citizen, spent the years of Taliban rule in Germany and returned to her native country to fight for women's rights, said Shahida Bibi, a member of the Kandahar women's association who worked with Achakzai.

Achakzai was a member of Kandahar's provincial council, and had been vocal in encouraging women to take jobs and encouraging them to fight for equal rights, Bibi said....[read more here]

The attacks on women by these cowardly murderers are just one of the very good reasons why our troops cannot leave Afghanistan. If the troops left, the Taleban would be able to continue unfettered their campaign of terror and brutally murder any woman who refuses to be dragged back to ancient centuries. They would be free to throw acid on little girls' faces, as they determinedly go to public schools, instead of having to revert back to clandestine, illegal schools run in private homes. As long as our troops remain there, there is hope for the women who come after Sitara. Sitara and her family are not unique in Afghanistan. Many families left Afghanistan when the Taleban took over; many of those same families have since returned, determined to reclaim their land and their lives from murderous thugs.

The image is striking. Having cast their ballots, [voting for the very first time] four women sit down to bask in the sun. One of them lifts her veil to look up. The brilliant smile that frames her face is for the world to see. After years of being confined to private spaces, this photograph by award-winning photographer Lana Slezic symbolizes the reclaiming of political and public spheres by Afghan women.

I found notice of an exhibition held in Toronto called: Voices on the Rise: Afghan Women Making the News.

Voices on the Rise: Afghan Women Making the News provides a look into the lives of Afghan women journalists, producers, managers, writers, photographers, filmmakers, human rights activists and parliamentarians. The photographs were first exhibited in Canada in October 2006; since that time, Afghan women have been battling increasing uncertainty, juggling newly-found freedoms with traditional responsibilities at home, and struggling with the ghosts of their country’s harrowing past and its on-going conflicts.[here]

Well worth a look here, but one picture particularly struck me, and made me think of Sitara and all the unknown Sitara's:

In memory of all Afghan women who have struggled.

On that site are the stories of many Afghan women who have heroically stepped out from the shadows of non-identity. Women like Sitara, who return from other safe countries, determined to take their rightful place in shaping the future for the generations of girls coming after them.

Brave, inspiring women all, and I have absolute faith that no matter how many of them the Taleban murderers silence, the women of Afghanistan will continue to be heard.

The blood of women such as Sitara demands nothing less. Let us always remember these heroes. We cannot leave our mission before all Afghan women are free.
Posted by The Brat at 6:38 PM

Women and men of all backgrounds who believe in the basic tenets of human rights should do everything in their power to make a personal stand against this sort of nonsense. We need to tell these muslim fanatics that it is not okay to suppress half of the population and that we will not stand for this. Let us support the education of women everywhere, so that they know that there is another world out there and they have the freedom to make choices and can support themselves.

I as an Afghan woman think that Taliban are using religion as an excuse to suppress and backward people for their own survival. Taliban know that empowering of peolpe men and women with education is the end of their power. Taliban backward, coward and none muslim who attack women. Attacking on women and children are prohibited in Islam but Taliban not only attack women and children they are using human shield to cause further damage to the civilian population.