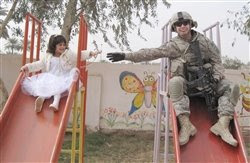 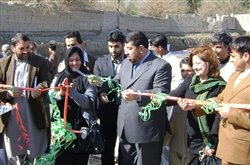 So MANY great stories, I *could* do a book length every single day! But for now, here's a bonus that I have to share:

The construction of a new art facility was the focus for the renovations in the Al-Moutasam kindergarten. Other refurbishments included new plumbing and electrical systems, new classroom doors and windows, and a fresh coat of paint.

The art facility is a sign that Iraqi education officials are developing educational programs outside of general subjects, officials said.

Iraqi security forces and 5th Squadron, 73rd Cavalry Regiment paratroopers attended the event as a sign of partnership with the district and its citizens.

“The turnout of people today is phenomenal,” said Army Sgt. 1st Class Donald Workman, a Gainesville, Fla., native assigned to the nonlethal effects section of the squadron. “This is the best school opening yet, and it’s a good sign that great things are coming to Iraq.”