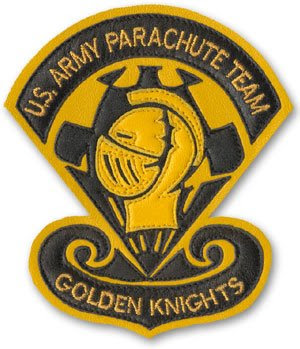 (source here and go read the amazing history there, too!)

FORT BRAGG, N.C. - The Golden Knights, the U.S. Army's official parachute demonstration team, kicked off their 50th anniversary today during a special ceremony that celebrated the team's half century of serving the country as Army ambassadors while also representing more than one million American Soldiers. Joining the team in celebration was the Honorable Pete Geren, Secretary of the Army, several original members of the 1959 team, alumni, friends and family.

As part of the event, the Golden Knights unveiled a special 50th anniversary patch which all team members will wear throughout the year. Busts for former team members Sgt. 1st Class Pedro Munoz, the first combat fatality in Afghanistan who jumped with the Golden Knights from 1998 to 2002, logging more than 4,000 freefall parachute jumps while shining for the Gold Demonstration team, and Chief Warrant Officer Michael J. "Mike" Novosel, a former pilot with the Golden Knights who earned the Medal of Honor for actions in Vietnam as a helicopter pilot, were also dedicated in recognition of their service.

"We have proudly represented the U.S. Army with every jump taken over the last 50 years. Each successful Golden Knights mission honors the sacrifices and accomplishments our fellow Soldiers make every day, whether they're fighting overseas or serving back home making a difference for their families, their communities and the nation," said Lt. Col. Anthony Dill, Commander of the Golden Knights. "To celebrate our 50th Anniversary this year, the Golden Knights will honor our unique history, all past and present members, our fellow U.S. Army Soldiers and the American public each time we jump."

As part on their ongoing 50th anniversary celebration, the Golden Knights have a variety of special activities planned for the coming months, including jumps into the new Yankees Stadium and the Statue of Liberty grounds in New York City.

The team will also continue to perform at air shows, compete on an international level and perform high-profile tandem jumps. In addition, the Golden Knights will visit high schools to work with local recruiters and help show young adults the variety of opportunities available in the U.S. Army.

For more information about the Golden Knights year-long 50th anniversary celebration or to learn more about the team's unique history and to view a schedule of events, visit www.usarec.army.mil/hq/GoldenKnights. (source)