U.S. Soldiers Give Gift of Tractors to Iraqi Farmers

U.S. soldiers presented 14 ArmaTrac 602 tractors like the one pictured to local sheiks at Combat Outpost Meade, Iraq, March 5, 2009. The tractors will allow the farmers to use more land for crops. U.S. Army photo by Pfc. Evan Loyd 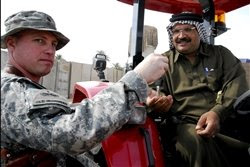 
U.S. Soldiers Give Gift of Tractors to Iraqi Farmers

Each Arma Trac 602 tractor can help to cultivate an area of more than 25 million square feet.

"When we were first asked [by the Lutifiyah council], we
immediately wanted to help," Army Lt. Col. Michael Mammay, commander of the task force, said. "Agriculture is very important in helping this area."

Lutifiyah Nahia is primarily an agricultural area, and the farmers there work mostly with handheld or animal-driven equipment. The new tractors will allow them to rebuild their farmland faster.

"Every day we drive down the road, we can see the green
returning to the area," Mammay said. "With the tractors we are providing today, we hope to see even more green return."

The improving security situation in Iraq has allowed the local government in Lutifiyah Nahia to focus on improving the economy for a better quality of life. The tractors not only will allow local farmers to grow crops, but they will contribute to the stability of the region.

"We won't squander the goodwill of the Americans," said Sheik Hamash, chairman of the Lutifiyah Nahia Council. "We will use these tractors to help bring back the area to its fullest."

Email ThisBlogThis!Share to TwitterShare to FacebookShare to Pinterest
Labels: U.S. Soldiers Give Gift of Tractors to Iraqi Farmers