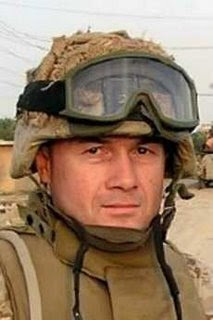 I am sure you all remember Lt. Col Chessani whose reputation has been dragged through the mud over a "massacre" at Haditha that never happened, and by the ensuing disgraceful allegations by Murtha (ex Marine.)

I last wrote about this gross miscarriage of justice in a piece called "I am a M**tha F*****! back in June 2008. If you need to, go to that link and refresh your memory. Today, comes this:

ANN ARBOR, MI – Late this morning, the Navy-Marine Corps Court of Criminal Appeals sitting in Washington DC, released their unanimous decision upholding the dismissal of charges against Marine Lt. Col Jeffrey Chessani on the grounds of apparent Unlawful Command Influence. But the case may not be over yet. [emphasis mine]

Richard Thompson, President and Chief Counsel of the Thomas More Law Center, observed, “LtCol Chessani, one of the most effective combat commanders we had in Iraq, was a made political scapegoat by the civilians in the Pentagon to appease the antiwar politicians and a liberal media. In fact, we now know that the story of the ‘massacre’ that prompted the Haditha prosecutions was a headline in a Time news article instigated by insurgent propaganda operatives.”...

There is more on this latest vindication of an amazing man; be sure to head here to read it all.

This decision could be appealed to the Court of Appeals for the Armed Forces (CAAF) and then even to the U.S. Supreme Court. The government has yet to announce whether it will pursue another appeal. (Same link as above.)

And yes, still waiting for a public official apology from that M***tha F***er.