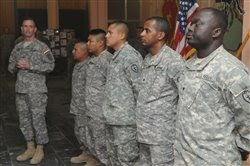 CONTINGENCY OPERATING BASE SPEICHER, Iraq, March 13, 2009 – The two soldiers -- one a Christian from the south, the other a Muslim from the north -- have nothing against each other, despite the past which tore their homeland of Sudan apart in more than 20 years of civil war.

Today, they are deployed together in Iraq with the U.S. Army, where they work with the same unit as interpreters. Despite Sudan’s violent past, the two men share a bright future -- both became naturalized U.S. citizens in a March 3 ceremony at Al Faw Palace in Baghdad.

Now married with two children, Mbory moved to the United States in 2003 and settled in Lincoln, Nebraska, where thousands of former southern Sudanese citizens call home. However, his path there was far from easy.

At the age of 18, Mbory’s stepbrother and uncle were killed in the second Sudanese civil war. He fled from Sudan to the Congo where he lived for several months, and then to the Central African Republic for five years before immigrating to the United States.

Mbory learned the French, Swahili, Arabic, Nigala, Sango and Moro languages in Africa. Upon arrival in the United States, Mbory’s 8-year-old daughter, Lidia, helped him learn English in Nebraska. He hesitated joining the Army because he didn’t want to leave Grace, his then-pregnant wife, alone at home. She persuaded him to go, and Munyo, their son, was born while Mbory was in initial entry training.

“I want to see the world peaceful in the future -- that is my hope,” he said.

Mbory’s father, four brothers and two sisters are still in Sudan; he is thinking of returning to visit them one day. After this deployment, he plans to work as a recruiter in Lincoln, to tell other Sudanese there of the positive advantages of joining the Army.

Army Spc. Magdi Ahmed, assigned to the same unit, said he also has found a brighter future in the United States. “I moved to the U.S. for freedom, for better opportunities, for a better life,” he said. “Joining the Army gave me the opportunity to fix things that I saw with my eyes, but I couldn’t do anything about.”

Ahmed’s parents were from Sudan, but he was born in Saudi Arabia. After working at a railway station for nearly 20 years, Ahmed’s father was forcibly retired by the government and replaced by an employee who received less pay.

The family moved to Dongla, the capital of northern Sudan, where they lived for six years during the war. Although his parents were Sudanese, they were considered foreigners because they had lived in Saudi Arabia.

“I didn’t feel like an equal in Saudi Arabia or in Sudan,” Ahmed said. Even though he had Sudanese citizenship and was a resident there, he had to pay more for college, according to Ahmed, because he was born in Saudi Arabia, a rich country.

The college faculty intentionally gave him failing grades because he didn’t agree with the government, Ahmed said. In Sudan he suffered negative experiences -- unfairness, discrimination and corruption -- but views those experiences as positives now because they prepared him for moving to the United States.

“The U.S. was the only place you could go for justice. I couldn’t get justice from my own country. The struggle I felt in Saudi Arabia and in Sudan made me feel like the U.S. would be a better place to live,” Ahmed said.

Ahmed moved back to Saudi Arabia in 2005, and immigrated to the United States a year later. In Wisconsin, a friend of his uncle’s helped Ahmed start a new life. After a month, he had his own apartment and job.

Ahmed’s parents, five brothers and sister live in Saudi Arabia, and his other relatives still live in Sudan, where his uncle died during the war. Southern Sudan will have the chance to vote for full independence in 2011, and Mbory adds, “God is watching.”

Whichever way you look at it, in my book both of these men are heroes - every day.

Thank YOU for your service!