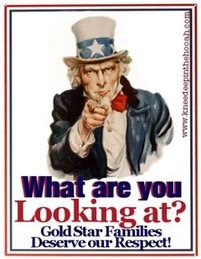 Sometimes, the ignorance coming out of Washington DC is so stunning, I am rendered almost speechless. From Thunder Run comes the following:

Tell Me Mr. Gates....How Can You Lift the Ban After This?

Please Mr. Gates, tell me how you can continue forward with your plan to lift the ban after visiting Dover and having, as your press release notes: ".... very moving experience ..."?

Gates “wanted to personally honor the sacrifice” of the three soldiers and one airman who died last weekend in a roadside bomb attack near Jalalabad, Afghanistan, Press Secretary Geoff Morrell told reporters.

Jalalabad is located between the Afghan capital of Kabul and the Pakistani city of Peshawar.

The secretary’s visit to Dover last night “was a very moving experience for him,” Morrell said....

There is more, of course. Go here and read the rest, and be SURE to read the comments. David, and two Gold Star Families, goes beyond my "ignorance" comment.

The insanity continues.
Posted by The Brat at 6:10 AM