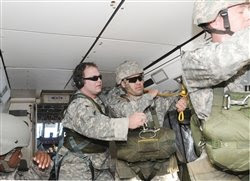 The journey to Fairfax’s milestone began in the summer of 2005 in a remote region of Afghanistan, when his truck was struck by an improvised explosive device. He suffered a severe injury to his right leg, as well as injuries to his right eye and left lung. His team's medic, Army Sgt. 1st Class Derrick Coyme, quickly went to work to stop the massive bleeding caused by Fairfax’s severed femoral artery.

He knew he was not in the best condition, he said, but he felt committed to recovering from his injuries.

"It never crossed my mind that I wouldn't get back to a team," he said. "My only goal was to get better and continue on with business as usual."

Through several surgeries and battles with infection, doctors were able to save Fairfax’s leg, and he began the long road of rehabilitation. In December 2005, he returned to the group, and his leadership gave him one mission: "Go get better."

Six months later, Fairfax was back to work, but he spent more athan a year struggling with pain. After several surgeries failed to make his leg more functional and reduce the pain, a friend and fellow amputee joked that he should just cut the leg off.

Fairfax gave the option serious consideration. After consulting several doctors and amputee soldiers, he said, he decided to go through with the amputation.

A year prior to the day of his graduation from the Jumpmaster Course, he had the operation to remove his right leg. The next year would be spent dealing with a cycle of rehabilitation and antibiotic-resistant infections. Each time an infection would come back, he was forced to remain off his prosthetic leg.

Once an infection healed, he would have to rebuild the muscle strength to walk in the socket again. When it was time for the Jumpmaster Course, it had been only three weeks since his last bout with an infection and his return to using the prosthetic leg...

Go read the rest of this great story here.

Thank you for your service!

CAMP VICTORY, Iraq, March 6, 2009 – Iraq seems a lot closer to home for two brothers from New York who are lucky enough to be sent here at the same time.

Army Sgt. 1st Class Daniel Greene, an operations noncommissioned officer in charge with the 10th Mountain Division’s Headquarters and Headquarters Detachment, and his brother, Robert Greene, a database administrator for Science Applications International Corp. and retired soldier, have been able to spend time together while in country.

The brothers, from Ellenville, N.Y., said being here together has made them more appreciative of each other.

“There were years when we didn’t have time to get together,” Daniel said. “I would say [being here together] brought us a lot closer.”

The Greenes try to get together once or twice a week to have coffee or dinner, reminisce about their childhood and talk about their families. They even call home together.

The brothers have not always been able to spend so much time together. When Daniel was 10, Robert joined the Army. After Daniel joined the Army, the brothers rarely saw each other. While the separations have been hard, they said, they can’t imagine not having served in the military. For them, it’s a lifestyle.

“You grow up from a teenager, and this is mostly what you’ve done, maybe a couple of odds and ends jobs, but it grows on you,” Daniel said. “Always being around a military installation, it’s part of your culture, a family tradition.”

Being together here has allowed the brothers to provide each other with moral support.

For Daniel, it feels like a vacation when he spends time with his brother. “Just having family around takes you out of Iraq for just that moment,” he said. ...


Go read the rest of this here.