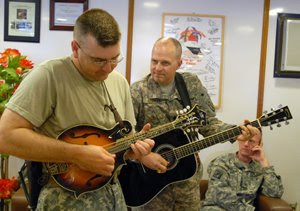 CAMP VICTORY — For the past nine months, a group of musicians have gathered on Sunday mornings to fill the air with bluegrass music at the Green Beans coffee shop here for anyone to come and enjoy.

The Baghdad Bad Boys performed together for the last time in Iraq, March 15. The group’s members will begin heading home this week.

While looking back on how the group first came together, Lt. Col. Gregory Rawlings, 18th Airborne Corps, chief of Multi-National Corps–Iraq’s C3 Force Management Division, said it all started as an opportunity to sit down and play music with others.

“It was a lot more than just playing at Green Beans,” Rawlings said. “I left a lot of good bluegrass picking back in North Carolina, so I asked Chaplain [Lt. Col.] Jeff Houston if he would like to try and get a group started. The intent was to get a group together that sat and picked as a means of stress relief. We wanted to do something besides work and sleep.”

The group began meeting Friday evenings for two hours in the Mini Chapel at the MNC–I Chaplain’s Office, Rawlings added. Meeting to play music became an opportunity for the group to forget about the stress of being in a combat zone and feel like they were back home for the time they were together making music.

During the Friday meetings, people would just show up to listen, said Chaplain [Lt. Col.] Mike Charles, Multi-National Division – Center division chaplain. Some would bring their own instruments and join the group. Friday nights became a sustainment support group for the community by getting together to have a good time, the chaplain added.

“At some point, we were asked to play at little events going on around Victory Base Complex,” Rawlings said. “Then we started taking our instruments to Green Beans for coffee after church on Sundays.”

“We really just wanted to sit in the corner and play some tunes to relax a bit,” he continued. “The workers there didn’t throw us out, so we kept going back.”

The group has played all over Victory Base, said Charles.

“We have had more invitations for us to play than we can practically fill,” he continued. “Sometimes, to fill those invitations, we either have to say no or just sent the group members that could go. We had to say no because we were working – duty first.”

The most significant thing the group has done while they were here together, Rawlings affirmed, is a fundraiser to benefit the Fisher House, a program that recognizes the special sacrifices of servicemembers and the hardships of military service by meeting a humanitarian need beyond what is normally provided by the Departments of Defense and Veterans Affairs.

“We played for six hours at the Green Beans and people contributed over $2,100 to go to Fisher House,” he added.

“We are going to have a reunion called the ‘Baghdad Bad Boys D-Day Reunion’ on June 6 in Fayetteville, N.C. at a central location,” Charles said. “Our families have never seen us play, so our reunion show will be the first time for them.” (source)

Hey Brat, You wanna go to their reunion concert? I do!!!!