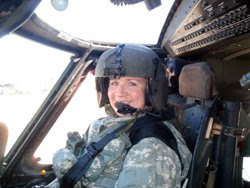 CAMP STRIKER, Iraq, (3/18/09) - If a pilot ever finds himself in the cockpit of a North Carolina Army National Guard UH-60 Black Hawk helicopter with a female aviator, he will have no doubt who she is - there's only one.

Army Maj. Michele P. Harper became a pioneer of the sky when she graduated from flight school in Fort Rucker, Ala., 16 years ago, becoming the only female Black Hawk pilot in the North Carolina Army National Guard. She's held onto the distinction ever since, but is hopeful that will be changing soon with some up-and-coming female pilots.

"It makes me feel good to have done something that many females have not done," said Harper, a Hendersonville, N.C., native. "But at the same time, I wish more females would go for a nontraditional military role. I mean, it is flattering to say, but I definitely would not mind flying with some females."

Harper, whose male colleagues tease her about women allegedly being bad drivers, and therefore worse pilots, said women are known to have better landings because they touch down more softly.

"Females always want things to be nice and pretty, and we take that into our flying as well," she said. "Pilots are always complimenting me on what a nice landing I have."

Harper may fly Black Hawks now, but she got interested in flying with her eyes on a much bigger 'bird.'

"I have always and still want to be an astronaut," said the mother of a 17-month-old son, Soren. "Before you apply to the space program, you have to be a pilot first, and I was always at the airport getting on any aircraft that they would let me."

Harper is deployed to Iraq as Task Force 449 Aviation Brigade's administrative officer. Her job consists of overseeing all personnel actions for the Task Force, including pay issues, awards and orders.

"It's the best job," she said. "I have an awesome staff. I love to help people, because I am a people person."

However, for Harper, there is no better experience than the time she spends in the sky...

There is much more about this GREAT role model. Go here to read the rest of this one.

I have a feeling Major Harper will be reaching far beyond her current horizons in the future. Thank YOU for your service, Major Harper.