JackAss of the Day Award 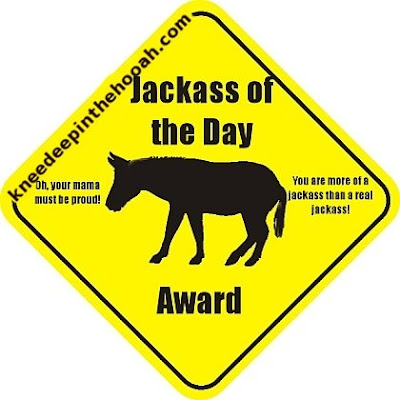 That logo and the Award is the brainchild of my friend Claire over at Knee Deep in the Hooah!

The title of this award is self-explanatory, and her latest awardee is Bill Maher. I must admit I missed this, but others have taken note of the latest smear on our troops. Read on:

Bill Maher is a total jackass (but you knew that already)

This jackass made a really crappy comment about our troops who are stationed in Germany and Japan. He doesn’t know why we have troops still in Germany and Japan. A lot of people often wonder why we still have the number of troops we have in those locations. I don’t begrudge the question, but why does this moronic, ass-hat have to continue on to say something slanderous about the troops?

That Great American Patriot Bill Maher smears our troops serving in Japan and Germany: “At some point these people are going to have to learn to rape themselves.”

Is it a disorder? Can he not help that when his mouth opens, stupid falls out? Why does he go over the top to the side of being outright obscene? Probably because his ratings are worse than his lame attempt at being funny or intelligent.

My apologies to jackasses every where....

Then, head on over to Bouhammer's Afghan Blog:

Bill Maher, nothing more than an oxygen thief

I used to like Bill Maher when I thought his satire was really funny. However over the last year or two I have been less and less impressed with this Oxygen Thief... (here)

I really don't need to add anything to what others have said about Maher, except:

Email ThisBlogThis!Share to TwitterShare to FacebookShare to Pinterest
Labels: Bouhammer, JackAss of the Day Bill Maher, Knee Deep in the Hooah

He's definitely a jackass and not worth my time.