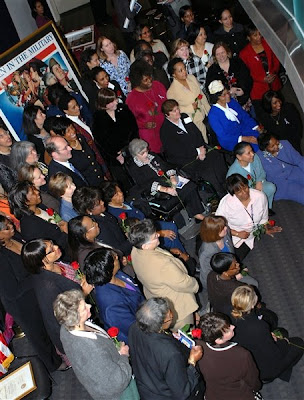 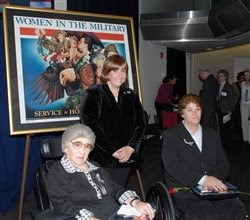 Artist Nancy E. Rhodes, center, stands in front of her painting "Women in the Military," which she presented to the U.S. Department of Veterans Affairs on March 26, 2009, during a Women's History Month ceremony. Alyce Dixon, left, is a World War II veteran who served in the 6888th Central Postal Directory Battalion, and Deb Joiner, a Vietnam veteran, is featured in Rhodes painting. DoD photo by Samantha L. Quigley


More great military women who prove that they ARE Every Day Heroes:

WASHINGTON, March 27, 2009 – The women of the 6888th Central Postal Directory Battalion were honored for their morale-boosting efforts during World War II in a ceremony at the Department of Veterans Affairs here yesterday.

Alyce Dixon and Mary Ragland, two former members of the battalion, were on hand to accept the accolades and to set the record straight.

“What a monumental challenge [you’d] taken on. That’s the kind of can-do spirit that is the hallmark of the American soldier,” said John Gingrich, Veterans Affairs’ chief of staff. “You cleared out two years [worth] -- 7 million pieces -- of backlogged mail in just three months.”

“It was 90,000 pieces of mail,” Dixon quipped from the front row, correcting the number of letters she and the other members of her unit cleared through a temporary post office in Birmingham, England.

Working three shifts, seven days a week, the women of the first all-woman, all African-American battalion, cleared the backlog in just three months before they were moved to France to start the same task all over again. They were given six months to complete the job. Again, they did it in three months.

“The women of the 6888 made tremendous sacrifices and endured many injustices,” Lucretia McClenney, director of the Center for Minority Veterans, said. “However, they not only prevailed, but they succeeded in their mission, and they created a positive impact on racial integration in the military.

“Today, the Department of Veterans Affairs, and especially the women veterans, are honored to salute you, the women veterans of the 6888 Central Postal Directory Battalion, and say thanks for answering our nation’s call to serve,” she said.

The battalion included 832 enlisted members and 31 officers. It was commanded by Army Maj. Charity Adams Earley who, by the end of the war, was the highest-ranking African-American woman in the military.

The ceremony also included the presentation of a painting honoring women veterans to the Department of Veterans Affairs. Though Gingrich said it captures the “heart and spirit of the woman veteran,” its creator, Nancy E. Rhodes, is, ironically, a civilian.

The artwork, titled “Women in the Military,” holds the distinction of being the nation’s first large-scale painting solely dedicated to all women in the military, past, present and future, to be permanently installed in a federal building.

The painting serves to honor the sacrifices generations of women have made for their country.

“Before I started this important work, and especially because I wasn’t a veteran, I felt it was essential to interview many veterans, both active and retired,” Rhodes said. “After listening to the accounts of veterans spanning World War II up until the Gulf War, I realized that while many women had positive experiences in the military, there were far too many others who were not treated with the dignity and respect they deserved.

“Even sadder, many of these women, especially some of our older veterans, didn’t think that they deserved recognition either,” she added. “It was astonishing to me that these veterans didn’t even know that they could apply for veterans benefits. They didn’t consider themselves to be real veterans like the men, even after enlisting and giving up four years of their lives to serve.”

Rhodes, born in Philadelphia, has earned degrees from both the Rochester Institute of Technology in New York and Temple University in her hometown. She and her family are currently living in East Lansing, Mich., where she is on the faculty at Lansing Community College.

Congress passed a resolution declaring March Women’s History Month in 1981 as an outgrowth of the celebration of Women’s History Week, which included International Woman’s Day. (source)

Email ThisBlogThis!Share to TwitterShare to FacebookShare to Pinterest
Labels: Every Day Heroes VA Honors Military Women of Past and Present