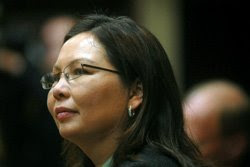 ARLINGTON, Va. (3/19/09) – While there are fewer barriers that need to be overcome by women, each woman serving in the military has broken barriers of her own, said Army Maj. Tammy Duckworth, an Iraq war veteran and former helicopter pilot with the Illinois Army National Guard.

“Those of us females who have been in the military for a few years have our own stories of being the first this or the first that,” said Duckworth, who was recently nominated by President Barack Obama to the post of assistant secretary of public and intergovernmental affairs for the Department of Veteran Affairs. “In some ways we each had to break through in our own way proving we were just as good as the men.”

The program also highlighted the accomplishments of the 6888th Central Postal Directory Battalion, a U.S. Army unit composed largely of African-American women who were given the task of sorting and delivering mail to the about seven million American troops stationed in Europe during World War II....

This really IS an awesome article. Take some time and go meet this woman here.