Some Gave all: "He would give you the world..." 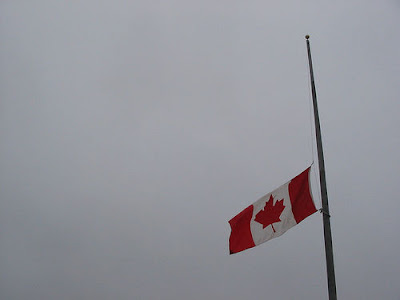 One Canadian soldier died and four were wounded when a roadside bomb exploded near an armoured vehicle on patrol northeast of Kandahar city in Afghanistan, the military said Sunday.

The soldiers were conducting security operations in the Sha Wali Kot District when the explosion occurred at about 1:15 p.m. local time on Sunday, the military said.

The injured soldiers, whose names are being withheld to conform with military policy, were taken by helicopter to a medical facility at the Kandahar Airfield. All are in stable condition and three of them will be taken to the Landstuhl medical facility in Germany. Their families have been notified, the military said.

"On behalf of all members of Task Force Kandahar, I would like to extend our heartfelt condolences to the family and friends of Trooper Diab," said Brig.-Gen. Jonathan Vance, commander of Canadian troops in Kandahar. "We will stand with you in your grief, and we will help you through the difficult days ahead."

Diab was an energetic, enthusiastic and dedicated soldier who loved to joke around and make people laugh, Vance said. He was extremely close to his mother Jihan and girlfriend Mary, he said.

"He never stopped giving," Vance said. "He brought joy and laughter to his friends and was deeply involved and committed to his church and youth group activities."

He was an avid soccer player who loved sports and outdoor activities and often spoke about how much he enjoyed taking his jeep and going cross-country driving, he said.

"His friends and comrades describe him as having [a] large heart for such a small guy," Vance said. "He would give you the world if he had it." (CBC here)

I would give the world, if I could, so none of our precious families have to face such a loss. I cannot, so instead I give prayers for all who love this young Canadian hero.

Email ThisBlogThis!Share to TwitterShare to FacebookShare to Pinterest
Labels: Some Gave all Trooper Marc Diab