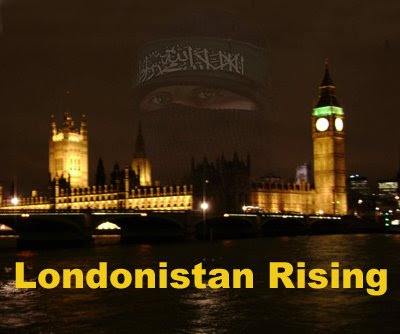 No surprise to most of us who pay attention, now comes an article daring to discuss just how bad the rise of Islamic terrorism is in England:

Last month, the British government controversially refused entry to Geert Wilders, enforcing a ban it had placed on the Dutch parliamentarian for his anti-Islam film, Fitna. While Britain works to eliminate the “threat” from the critics of Islam, however, the British government is facing a far greater peril from the spread of radical Islam on its own territory.

The CIA reportedly has warned President Obama that Islamic extremists living in the United Kingdom are now viewed as the greatest threat to the United States. “Around 40 per cent of CIA activity on homeland threats is now in the UK. This is quite unprecedented,” one British official was quoted as saying in The Telegraph.

Further heightening the threat, these extremists are becoming ever more connected with overseas terrorist networks. Dozens of British citizens are believed to have traveled to Somalia, to fight alongside Al-Qaeda-linked Islamic militants seeking to seize the country from the current government. The Somali militants are reportedly receiving funding from the large Somali community in the United Kingdom. British Muslims have also been providing Taliban forces in Afghanistan with bomb parts, while others are thought to have joined the battlefield and fought against the British military.

Britain’s terrorist networks are vast. According to a joint intelligence report by Britain’s Defense Ministry, MI5 and Special Branch, there are thousands of terrorism supporters in the country. These findings echo an earlier warning from the director of MI-5 that there were at least 2,000 people in the country identified as posing a threat to national security. “It is also estimated that there are some 200 terrorist networks functioning in Britain today who are involved in at least 30 plots,” The Telegraph reported in November 2008.

The pool of potential terrorist recruits appears to be growing. In 2008, the non-partisan Center for Social Cohesion released a poll of 1,400 Muslim students in the United Kingdom and found some frightening results. While there was strong support for some moderate beliefs – including the notion that Islam is compatible with democracy and support for gender equality – some 24 percent felt that Allah did not view males and females equally, and 33 percent favored the construction of “a worldwide Caliphate based on Sharia law.”

Sharia law, indeed, already has found purchase on British soil. For example, the British judicial system must now enforce the decisions of Sharia-based courts. Although participation in the Sharia system is voluntary, similar to accommodations made for orthodox Jews, such parallel courts are bound to conflict with the values of the Western system of justice. They also serve as the infrastructure necessary for Islamist leaders to institute Sharia law in Britain’s Muslim communities. Hence there is understandable concern that some Muslim citizens, particularly women, will be forced “voluntarily” to submit to this form of justice, lest they be labeled apostates.

Younger generations of Muslims make up another concern. The websites of some Muslim schools have been found to be promoting extremist thinking and have pushed children to isolate themselves from the surrounding culture and society. Some websites denounced Harry Potter, chess, Monopoly, Ludo, draughts and even cricket as un-Islamic and one even linked to a website that promoted jihad. Another website claimed that women should remain indoors and that rape victims shared partial blame for their attack. This type of teaching contributes to the lack of assimilation that fuels radicalism and leads to creation of “No-Go Zones” – essentially, Muslim states within states shut off from mainstream British society.

The British government’s reaction to the Islamist offensive has largely been to placate the most radical voices in the Islamic community. Thus, the government has gone to great lengths to make sure that “those who want to spread extremism” by criticizing Islam, like Geert Wilders, don’t set foot inside Britain. By refusing entry to Wilders, the British government won the praise of the Muslim Council of Britain, which was co-founded by Muslim Brotherhood member Kamal Helbawy, a supporter of Hamas who said in 1992, “Do not take Jews and Christians as allies, for they are allies to each other.” Ironically, Helbawy himself was denied entry into the United States in 2006....

Another day, another dangerous absurdity. Read the rest here.

Email ThisBlogThis!Share to TwitterShare to FacebookShare to Pinterest
Labels: Terrorists in England

The demand for Muslim schools comes from parents who want their children a safe environment with an Islamic ethos.Parents see Muslim schools where children can develop their Islamic Identity where they won't feel stigmatised for being Muslims and they can feel confident about their faith.
Muslim schools are working to try to create a bridge between communities.
There is a belief among ethnic minority parens that the British schooling
does not adequatly address their cultural needs. Failing to meet this need could result in feeling resentment among a group who already feel excluded. Setting up Muslim school is a defensive response.

Bilingual Muslim children need state funded Muslim schools with bilingual
Muslim teachers as role models during their developmental periods. Muslims
have the right to educate their children in an environment that suits their
culture. This notion of "integration", actually means "assimilation", by
which people generally really mean "be more like me". That is not
multiculturalism. In Sydney, Muslims were refused to build a Muslim school,
because of a protest by the residents. Yet a year later, permission was
given for the building of a Catholic school and no protests from the
residents. This clrearly shows the blatant hypocrisy, double standards and racism. Christians oppose Muslim schools in western countries yet build
their own religious schools.

British schooling and the British society is the home of institutional
racism. The result is that Muslim children are unable to develop
self-confidence and self-esteem, therefore, majority of them leave schools with low grades. Racism is deeply rooted in British society. Every native child is born with a gene or virus of racism, therefore, no law could change the attitudes of racism towards those who are different. It is not only the common man, even member of the royal family is involved in racism. The
father of a Pakistani office cadet who was called a "Paki" by Prince Harry
has profoundly condemned his actions. He had felt proud when he met the
Queen and the Prince of Wales at his son's passing out parade at Sandhurst
in 2006 but now felt upset after learning about the Prince's comments. Queen Victoria invited an Imam from India to teach her Urdu language. He was highly respected by the Queen but other members of the royal family had no respect for him. He was forced to go back to India. His protrait is still in
one of the royal places.

There are hundreds of state schools where Muslim pupils are in majority. In my opinion, all such schools may be designated as Muslim community schools with bilingual Muslim teachers. There is no place for a non-Muslim child or a teacher in a Muslim school.
Iftikhar Ahmad
www.londonschoolofislamics.org.uk

The only real problem I have with your comment, is why does the state have to pay for your schools? If this is the school you want, why don't you pay for it. Why does the government of any country need to pay for special schools for your children? Many of American families do not agree with American schools and home-school their own kids. While paying taxes for schooling other children. So??????? Exactly how are "Muslim schools" trying to build a bridge?? Sorry, I've seen the videos and the bridges I see have American bodies hanging from them.