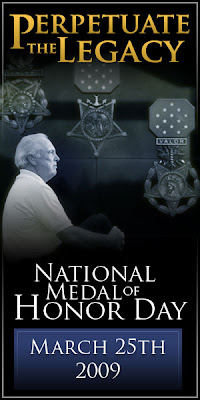 * Pfc. Ross A. McGinniss, U.S. Army, 19, Knox, Pa. On Dec. 4, 2006, McGinniss smothered an Iraqi insurgent's grenade inside an Army Humvee in Baghdad. His four comrades escaped; he died. His Silver Star was upgraded after a Pentagon review.

* Master-at-arms, 2nd Class Michael A. Monsoor, U.S. Navy, 25, Garden Grove, Calif. On Sept. 29, 2006, Navy SEAL Monsoor covered an enemy hand grenade that had struck him in the chest at Ar Ramadi, Iraq, giving his life while saving the lives of two SEAL teammates.

* Lt. Michael P. Murphy, U.S. Navy, 29, Patchogue, N.Y. On June 28, 2005, east of Asadabad in Afghanistan's Kunar Province, Navy SEAL Murphy and his four-man team were surrounded by more than 50 insurgents. He fought to the death while trying to communicate the unit's position to headquarters.

* Sgt. 1st Class Paul R. Smith. U.S. Army, 33, Tampa, Fla. On April 4, 2003, near Baghdad International Airport, Smith, a 13-year Army veteran, manned a .50-caliber machine gun and held off an enemy force of more than 100 while numerous American wounded were evacuated from the battlefield. He was killed by enemy fire. On April 4, 2005, he became the first Iraq war Medal of Honor recipient.

* Navy Petty Officer Danny P. Dietz, of Littleton, was killed in Afghanistan's Kunar Province on July 4, 2005, during a Navy SEAL search and rescue operation. The 25-year-old was awarded the Navy Cross, which ranks just below the Medal of Honor.

[All of the above courtesy of Rocky Mountain News here]

Others are also remembering these fine heroes today. Tankerbabe has a post up, and you can find that here. She recounts the story recently going around the internet of passengers on an airline who couldn't name these men. How sad is that that so many Americans are ignorant of men who are the finest of what their country has? Go, now and read there.

When you are done there, go to this link and this one, and educate yourself.

Let us always remember and honour.

Email ThisBlogThis!Share to TwitterShare to FacebookShare to Pinterest
Labels: Medal of Honour Day 2009