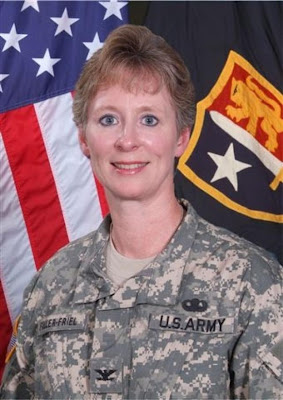 Now, 25 years later and a colonel, she's the first female commander of the U.S. Army NATO Brigade, headquartered at Tompkins Barracks in Schwetzingen.

She said it all started back in high school when a "diligent recruiter" told her of the opportunities the Army could offer her through ROTC. Back then, she admits she didn't even really know what the letters 'ROTC' stood for.

Today, she's the commander of all Soldiers serving in three NATO battalions and 10 companies scattered throughout 33 locations in 13 countries.

"My husband and I served in NATO as majors and we really didn't know this opportunity was there," she said. "We were at (Training and Doctrine Command) ... as the G1 (Adjutant General), and they said 'we want you to come and take the NATO Brigade' and I thought 'there's no such thing.'"

Sgt. 1st Class Larry Gray, USANATO Brigade's Equal Opportunity advisor, said having Fuller-Friel take command as the first female in that role is noteworthy not only for the women in the brigade, but for the Army as a whole.

"I think it's really good that other nations know that in our country, females are getting the opportunity to lead troops and can do it just as well as the men," he said. "They get those opportunities to train and lead, and having her in that role is very significant."

Fuller-Friel and her husband, retired Maj. Jack Friel, a field artilleryman, met and married at Fort Leavenworth, Kan., and have three sons; John, a company commander at Fort Hood, Texas, who is currently serving his third tour in Iraq; Mark, a captain in the Indiana National Guard; and Matthew, a sixth-grader, whom she says "can't wait to be in uniform."...

It IS Women's History Month in the US. The subject of this post, and the one below are perfect examples of women being more than capable of doing anything they set their hearts on. Go read the rest of this article here.
Posted by The Brat at 12:48 AM