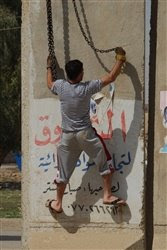 An Iraqi man hooks chains onto the lifting points of a concrete barrier as the barriers are removed from a marketplace in Samarra, Iraq, March 23, 2009. This was the first step in a citywide barrier removal project.

Iraqis Tear Down Wall, Reminder of Darker Days in Iraq

The concrete barriers, commonly known as "T-walls," surround several government and military buildings throughout Samarra to provide a layer of protection against insurgent attacks. While T-walls are a familiar site in Iraq, they are a sign of more dangerous times, and most Samarra residents agree it's time for them to go.

The site selected for the initial barrier removal is in a
section of Samarra that was once used for public executions in darker days. Today, it is a peaceful marketplace.

"Samarra has become very peaceful," Omar Khaled, a local produce shop owner, said. "The barriers remind us of bad times, but it is time to look toward the future and enjoy our peace. It is time to reopen Samarra."...