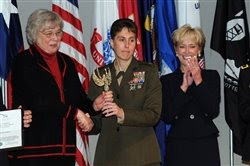 In keeping with Womens History Month, another GREAT story to share with you!

The recipients were awarded the 2009 Foreign Language and Science, Engineering and Math Role Model Award on March 19 at the Women in Military Service for America Memorial at the gates of Arlington National Cemetery in Arlington, Va.

"For generations, women across our great land have helped make our country stronger and better," Gail H. McGinn, deputy undersecretary of defense for plans, said. "They have improved our communities and played a vital role in achieving justice and equal rights for all our citizens.

“The [Defense Department] joins our nation to recognize the many contributions women make to our society and ensure that the history of American women is recognized."

The general said during her years as a junior officer, she was largely unaware of the challenges women had faced in military service prior to her arrival. She said it was those who came before her who carved the path.

"We really need to recognize and celebrate those ladies who just kind of went through uncharted territory with machetes," Cornum said. "People like me who come after that think that path has always been there -- and it just has not been. I really did not appreciate that until somewhat recently."