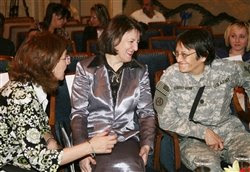 
Army Corps of Engineers Opens Doors for Businesswomen in Iraq

The division has set aside a percentage of contracts in the Foreign Military Sales and Iraqi Security Force Funds programs to award to women-owned businesses in Iraq, Navy Capt. Joseph Konicki, GRD’s director of military programs, said.

The contract set-asides mark the first time GRD is tapping into a portion of its Foreign Military Sales program, which is ultimately funded by the Iraqi government to build its own military-related infrastructure, officials said. The additional Iraqi Security Force Funds program, which also has a set-aside portion for Iraqi businesswomen, is U.S-funded.

Konicki said Iraqi businesswomen are welcome to bid on contracts for any projects they feel competent to complete, not just the percentage of work specifically set aside for them.

The conference, organized by Azza Humadi, program manager for GRD’s Women’s Advocate Initiative, opened a dialogue for strategies to keep the program running when U.S. forces withdraw from Iraq.

“The title, ‘Women-owned Business and the Future,’ means we have finished an era, and are entering a new one,” Humadi told the audience. She expressed concern that the drawdown of U.S. forces in Iraq will affect her program, as fewer people will require help from Iraqis who provide service and construction work...

Here is the rest of this story. Go read!

Isn't this a wonderful thing? I listened to Obama in his Foreign Policy address today, talk about how Afghans wanted safety and peace and tranquility (not his words, exactly) and especially women and "girls." Look what the women were going through in Iraq.

Okay - once country at a time. I'm all for making life far, far better for women and girls everywhere - and especially in Muslim countries.