[Bratnote:  NO apology from me for this repost....]

Michael's family still lives every parent's worst nightmare, yet they have not given up hope. See News1130 here.   Below is a repost of my original post on Michael, because I also hold out hope that one day, Michael WILL be found...and his family will find peace in some measure. 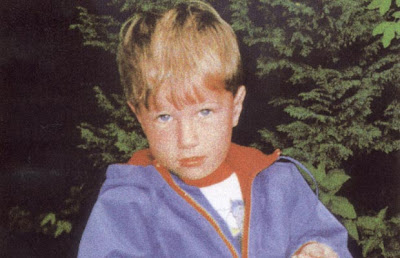 Twenty years ago, 4 year old Michael Dunahee was at a Victoria, BC park with his family. Within minutes, he disappeared without a trace. 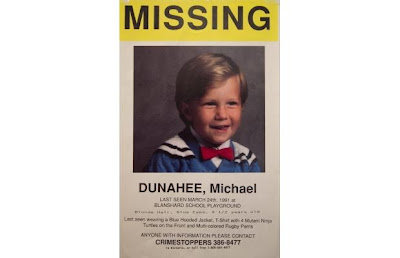 From Lighting Their Way Home:

On March 24th, 1991, Crystal Dunahee fixed Michael’s jacket in the parking lot of Blanshard Park, an out of the way park in a tough Victorian neighborhood. Crystal and a friend went to play a softball game in a field north of the parking lot, while Micheal asked to play on a swing set just south of the lot. Bruce reminded his son not to wander away from the playground or leave with any other children. He then took the couples 16 month old daughter, Caitlin, to the side of the ball field, not 100 meters away from the playground. Bruce recalls that after about 5 minutes, he stood on a rocky outcropping to check on his son. The playground was empty and the police were immediately called. Two other witnesses, in addition to Michael’s parents, told the police that they did see Michael playing in the park that day. Family, friends and relatives of the Dunahee family were all very quickly ruled out as possibly being involved in his disappearance.
(More here)

“His disappearance rocked the community and there are still no answers,” said Sgt. Grant Hamilton, a Victoria police spokesperson.


Since the 15th anniversary of Michael’s disappearance, Victoria police have received 500 tips. In any given month, multiple possible sightings are reported.


None were as promising as a recent sighting of Michael, who would now be 24, in Chase, B.C. Residents of the town were certain it was him.


When police investigated, they took a DNA sample, but it confirmed the man was not Michael Dunahee.


Crystal Dunahee’s eyes were red and filled with tears Wednesday as she spoke to reporters at the Victoria Police Department on the 20th anniversary of her son’s disappearance.


“(His memories) are still embedded in our lives and in our hearts,” she said. “We know someone is out there who knows what happened. We need to find closure so we can move forward.”


A service for Michael’s memory was held yesterday at Our Lady Queen of Peace Parish in Esquimalt.
I remember that day very well, and over the years have watched as his family has pleaded for answers. So far, there are none. As time has gone by, there have been image enhancements of what Michael, who would be 24 years old now, would look like.

From Find Missing Children comes this picture of what he may have looked like at 17 years old:

Michael's disappearance spawned one of the largest police investigations in Canadian history and to date, over 11,000 tips have been received by police. The case was a major story for many years, being reported across Canada and in the US. Despite the large number of tips, and a $100,000 reward, police do not have any solid leads in the case.

Michael's mother Crystal has become an advocate for missing children's issues in British Columbia, and currently serves as the president of Child Find British Columbia. In 2002, Crystal lent her voice to support the Royal Canadian Mounted Police (RCMP) in calls to introduce an Amber Alert system in BC, stating that she believes her son would have been found had such a program existed in 1991. The system has since been implemented in most regions of Canada.

Michael's sister, Caitlin, who was a toddler at the time Michael disappeared, is a High School student now. She created a FaceBook page called "We Will Never Forget Michael Dunahee."

Crystal Dunahee speaks at a press conference at Victoria police headquarters regarding the disappearance of her son Michael. (March 22, 2011)

"Someone knows what happened to Michael and where he is today,"... "We are asking them to come forward and pass on that information to help us find some closure."


I agree, which is one of the reasons I am writing about Michael today. I believe that someone, somewhere has information that can tell what happened to Michael that day twenty years ago.

Through the power of the internet, I am hoping that credible information on Michael's whereabouts - what happened to him - will come to light.

Crystal, Bruce and Caitlin Dunahee deserve to know what happened to their precious 4 year old Michael.


[For a current look at methods used by law enforcement to resolve such cold cases, go to the CBC here.]
Posted by The Brat at 2:57 PM

I hope he is found and returned to his parents. This is so terribly sad.


there was a witness, young woman, with newborne child, very shy and timid, long hippy style blond hair, she walked past the female abductor as she was squatting and talking to him....the witness is still alive, does not realize at all that the key lies with her....even today, she still has no idea at all of what she saw...good luck trying to find her and get her to talk...she is a very angry and scared woman today...

about the kidnappers....they separated not long after, with the woman taking Michael...the man is deceased, but the woman is still alive, lives alone, reasonably wealthy, hair is greying, and tied neatly in a bun...she adopted two (?) children later on....

Michael had a trouble life growing up in the US....at age 15 or 16,he made a girlfriend pregnant....ran away from home, having no idea who he was...I can sense that he was still alive at age 20,but that's about it...either he has mentally severed all ties with his biological family, or he has finally found peace in the arms of God...

ps: the picture of Michael shown as a grown up is way of the mark....you might want to have a relook at that....kind regards....

^^^Wow...that makes me angry. Such nonsense getting in the way of reality.

I hope that someday, it is found out what happened to Michael Dunahee. I was a kid in Alberta when he went missing and I remember it being on the news.