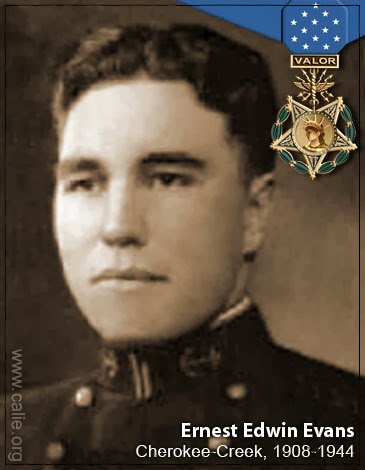 For conspicuous gallantry and intrepidity at the risk of his life above and beyond the call of duty as commanding officer of the U.S.S. Johnston in action against major units of the enemy Japanese fleet during the battle off Samar on 25 October 1944. The first to lay a smokescreen and to open fire as an enemy task force, vastly superior in number, firepower and armor, rapidly approached. Comdr. Evans gallantly diverted the powerful blasts of hostile guns from the lightly armed and armored carriers under his protection, launching the first torpedo attack when the Johnston came under straddling Japanese shellfire.

Undaunted by damage sustained under the terrific volume of fire, he unhesitatingly joined others of his group to provide fire support during subsequent torpedo attacks against the Japanese and, outshooting and outmaneuvering the enemy as he consistently interposed his vessel between the hostile fleet units and our carriers despite the crippling loss of engine power and communications with steering aft, shifted command to the fantail, shouted steering orders through an open hatch to men turning the rudder by hand and battled furiously until the Johnston, burning and shuddering from a mortal blow, lay dead in the water after 3 hours of fierce combat. Seriously wounded early in the engagement, Comdr. Evans, by his indomitable courage and brilliant professional skill, aided materially in turning back the enemy during a critical phase of the action. His valiant fighting spirit throughout this historic battle will venture as an inspiration to all who served with him.

You can read more about Commander Evans here and here