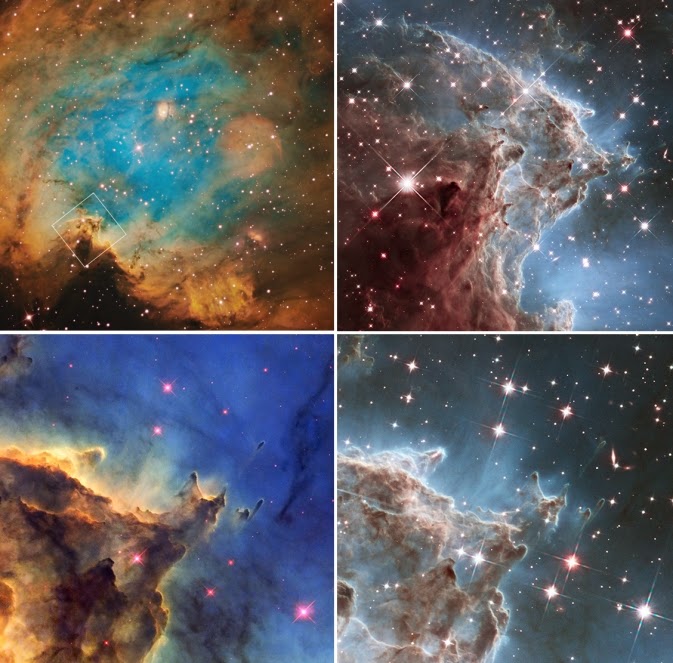 This colorful collection of Hubble Space Telescope images of portion of the Monkey Head Nebula reveals a collection of carved knots of gas and dust silhouetted against glowing gas. The cloud is sculpted by ultraviolet light eating into the cool hydrogen gas.
Image Credit:   NASA, ESA, Hubble Heritage Team (STScI/AURA)

In celebration of the 24th anniversary of the launch of NASA's Hubble Space Telescope, astronomers have captured infrared-light images of a churning region of star birth 6,400 light-years away.
The collection of images reveals a shadowy, dense knot of gas and dust sharply contrasted against a backdrop of brilliant glowing gas in the Monkey Head Nebula (also known as NGC 2174 and Sharpless Sh2-252).

The image demonstrates Hubble's powerful infrared vision and offers a tantalizing hint of what scientists can expect from the upcoming James Webb Space Telescope.

Massive newborn stars near the center of the nebula (and toward the right in this image) are blasting away at dust within the nebula. The ultraviolet light emitted by these bright stars helps shape the dust into giant pillars.

The Hubble Space Telescope is a project of international cooperation between NASA and the European Space Agency. NASA's Goddard Space Flight Center in Greenbelt, Md., manages the telescope. The Space Telescope Science Institute (STScI) in Baltimore conducts Hubble science operations. STScI is operated for NASA by the Association of Universities for Research in Astronomy, Inc., in Washington.

Email ThisBlogThis!Share to TwitterShare to FacebookShare to Pinterest
Labels: Hubble is 24