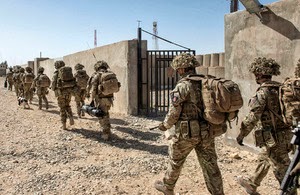 The last UK soldiers to be based at MOB Lashkar Gah

UK forces have now closed or handed over to Afghan forces all but 2 of their bases in Helmand province.

In a complex and well-planned operation spanning more than a month, Main Operating Base (MOB) Lashkar Gah and Patrol Base (PB) Lashkar Gah Durai have been handed over to Afghan control. A third base, MOB Price, has also been closed.

From a peak of 137 UK bases, just Camp Bastion, which remains the main base for UK personnel, and Observation Post Sterga 2 are now under UK control. The majority of the former UK bases are now in the hands of the Afghan National Security Forces (ANSF).

Afghan forces are now leading 97% of all security operations across the country and are carrying out over 90% of their own training.

The handover and closure of our bases across Helmand underlines the progress UK forces have made to increase security and stability across the province but also to build up the capability of the Afghan forces who will carry that work forward.

Those service personnel who have served in Lashkar Gah and Lashkar Gah Durai and at MOB Price as part of successive UK brigades have made a huge contribution to the campaign which has safeguarded our national security at home.

UK combat operations will cease by the end of this year but our support for the Afghan people will continue. Meanwhile, our troops will continue the mammoth task of getting our people and equipment home by Christmas....