Iraqi (and American) Children still paying the price for Obama's "moment of success."

"One picture says a thousand words" is often true. 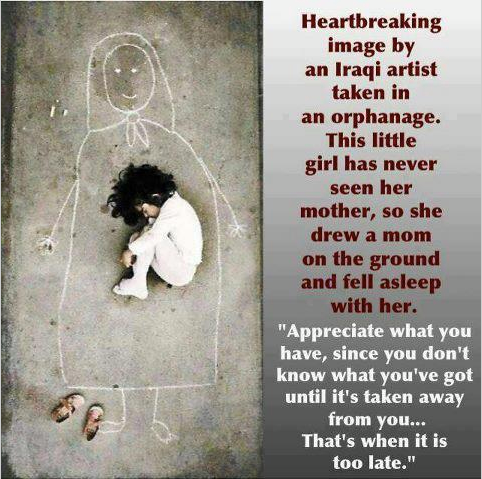 Over the last 12 years or so, we have all seen horrific images of the human cost of this ongoing Global War On Terror.  I have heard (and shared) first-hand stories from our Troops of the local children they meet on their deployments in the hellholes of the world..... 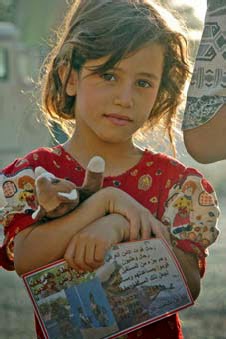 You may not know this Iraqi child, but this little girl's picture had a permanent place on MAJ Chris Galloway's desk, and he shared it with us.  Far different from the first picture above.  I keep it as constant reminder of the price ALL our children have paid for the price of the politicians' bs, ignorant  'foreign policy' decisions.  (In case you are unaware, Chris' children are also growing up without their dad....)

Back in 2011, Obama staged one of his never ending photo/campaign ops - using our Troops as props - and declared the Iraq war a 'success'...

Barack Obama marked an end to a war he once described as "dumb" by declaring the conflict in Iraq a success and saying the last US troops will leave in the coming days with their "heads held high".

The president told an audience of soldiers at Fort Bragg that the final pullout from Iraq after nearly nine years of war is a "historic" moment and that the country they leave behind is "an extraordinary achievement".

"It's harder to end a war than begin one. Everything that American troops have done in Iraq - all the fighting, all the dying, the bleeding and the building and the training and the partnering, all of it has landed to this moment of success."..

"Moment of success".......  Yeah, right, as the terrrorist flags fly high above Fallujah and Ramadi, where the ground will be forever soaked in the life blood of our Fallen Heroes, there is NO success in Iraq today.

Just this past week came this reminder of what is going on every.single day in the land where the Iraqi families - the children - got a fleeting taste of freedom: 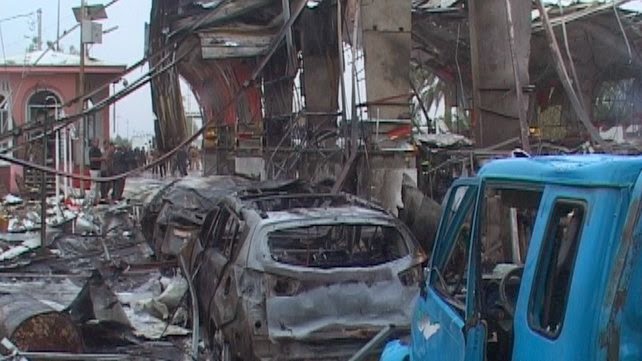 A suicide bomber detonated an explosives-rigged minibus at a crowded checkpoint south of Baghdad, killing at least 45 people.

The blast at the checkpoint at the northern entrance to the city of Hilla also wounded 157 people.

At least 50 cars were set ablaze with people trapped inside and part of the checkpoint complex was destroyed, a police officer said.

The scene of the attack was strewn with debris from the checkpoint, and the shells of burnt out cars littered the road....


More, plus video (if you can stand it) here.

I wish I could tell you this is a rare 'isolated' attack, but I cannot.  These murders are happening every day,  but the msm, for the most part, seems to ignore the ongoing carnage which is the result of Obama's election campaign promise to bring our Troops home.

And what of our Troops who did not make it home?  The children of our Coalition Fallen Heroes may not be living on the streets (although given the stats on the number of homeless Veterans who did it make it home, who can tell??) but I can tell you that in many of our families, there is a whole generation of kids growing up without their dad or their mom.

Just as that little Iraqi girl who draws meagre comfort in the chalked outline of a mother she never knew, so too, do our kids feel the loss of their parent every.single.day.  On important days like prom, dad is not there, and the loss is felt.  The young girls who proudly display their new haircuts - without their Fallen Hero dad there to share the delight of his girls growing up.

The little girl who is beyond stressed out because her Fallen Hero daddy is not here to escort his beloved daughter to the ritual "Daddy/Daughter Dance."

So yeah, the politicians may slap themselves on the back and congratulate themselves on their 'successful' foreign policies.  THEY are apparently impervious to the real cost of their abject failures to care for the children of the world; their failures to protect those who pay the highest personal cost of decisions made purely on political grounds, is criminal.