Hostage nuns returned, LA Gangbangers join the fight, thousands starved as war strategy, Canadian journalist killed, UN issues 'stern warning'.... while Obama has holiday in Florida and Kerry sends out a 'climate change is the most dangerous threat' memo to US Embassies: 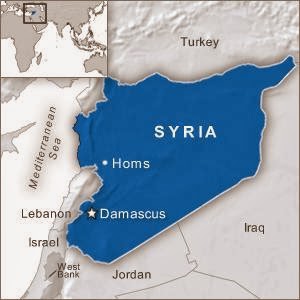 BEIRUT, Lebanon — Syrian insurgents released 13 nuns and three attendants who disappeared three months ago from their monastery in the ancient Christian town of Maaloula, Lebanese and Syrian officials said early Monday, ending a drama in which rebels said they were protecting the women from government shelling and Syrian officials said they were abducted in an act of intimidation against Christians.

The handoff was infused with suspense until the last moment. Officials said Sunday afternoon that the nuns had crossed the mountainous border to Arsal, a pro-rebel town in Lebanon, to be handed off to Lebanese officials and driven to Syria.

But amid reports of last-minute problems, reporters and government supporters waited hours at the border with no sign of the nuns. Finally, early Monday, the Lebanese channel Al Jadeed showed the black-clad nuns at the border, beaming, as one embraced a Lebanese security official and officers carried another....

About a hundred Americans have gone to Syria to take part in the war, all of them — with the apparent exception of two L.A. gang members named “Creeper” and “Wino” — to fight on the side of the Sunni rebels against the Alawite Assad regime. In a video recently posted on YouTube, the two are shown brandishing AK-47s and firing at an unseen enemy. Their tattoos identify one of them as a member of Sureños-13, which is affiliated with the Mexican mafia, and the other as a member of Westside Armenian Power gang. They tell the camera they are “in Syria, gangbangin’.”

ABC News reports that a video posted recently on YouTube shows two gang-tattooed and camouflaged men, who call themselves “Creeper” and “Wino,” holding AK-47s and saying that they are “in Syria, gangbangin’.”

The video has been posted online a few days ago, but the LAPD says they learnt about the two LA gang members in Syria five weeks ago.

Deputy Chief for Counterterrorism Mike Downing told ABC News Sunday that “My organized crime and gang investigators found it online and on Facebook,” Downing said. “We’re kind of concerned about their recruitment and whatever other associates they have here… We predicted this would happen — the [organized crime and terrorism] convergence. What we’re worried about is the ones we don’t know about here or coming back to the U.S.”...

As the slaughter continues in Syria, the barrage of pictures and stories of innocent civilian casualties has slowed to a trickle, as the world media has moved on to the next 'top story'.  However, the carnage in Syria continues unabated.  From the BBC: 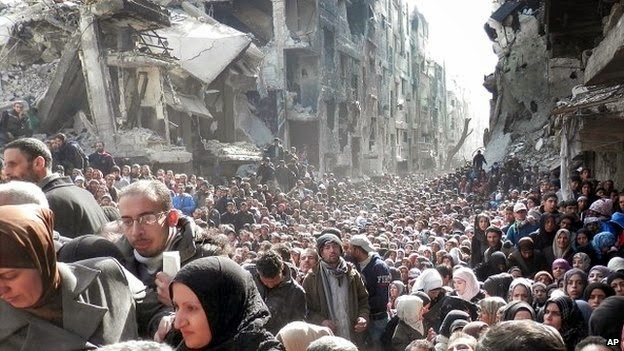 Starvation tactics against civilians are being used as a weapon of war by the Syrian government, the human rights group Amnesty International says.

A new report says at least 128 refugees have died at the besieged Yarmouk camp in Damascus as a result.

It says thousands of people still trapped there face a "catastrophic humanitarian crisis".
Amnesty says families have been forced to forage for food in the streets - risking being killed by snipers.

Another journalist was killed in Syria - this time a Canadian -  assuring Syria its place at the top of the list of the most dangerous places for journalists to work.  (See the December 2013 report from Committee to Protect Journalists)

From the CBC comes this:

Moustafa, 7 others reportedly killed in rebel-held Hadariyeh area of Aleppo

The friends and family of a Toronto photojournalist are holding a vigil in his hometown on Sunday evening, just hours after they learned that a bomb attack had claimed his life in Syria.

Ali Moustafa, 29, and seven others were killed Sunday when a pair of explosive devices were dropped in a rebel-held part of Aleppo, Syria.

The photographer’s sister, Justina Rosa Botelho, confirmed her brother’s death after viewing a photo of his corpse that was sent to her by activists.

"He wanted to tell mom he was okay," she said. "He never told me he was in Syria. I guess he was trying to hide that."..

Despite all evidence to the contrary, John Kerry insists that climate change is the main threat to us all.  Apparently the UN is not buying into that and has another message for the US.

From Voice of America:

US Needs New Strategy for Syria

The crisis in Crimea won't keep President Barack Obama from forging ahead with a weekend getaway with his wife and daughters in the Florida Keys.

But it's more than the Oval Office that will be dark as Russia's incursion into Ukraine reaches its one week mark. Vice President Joe Biden and his wife are vacationing in the Virgin Islands. And national security adviser Susan Rice is traveling in the Middle East for meetings with her counterparts.

Paul C. Light, who teaches public service at New York University, said Obama would have been wise to remain in Washington. Being in Florida with a still-fluid situation in Ukraine "makes the president look less interested in the issue than he clearly is," Light said. "It's just very bad optics."...

Ya think?  Apparently, Mr Light, and abc news for  even reporting this, need to drink more kool-aid.

No mention of whether MIC took his red crayons with him.